Here are 100 of the best humanity quotes I could find.

Simply to inspire you with great words from the most loving and unifying people in history. 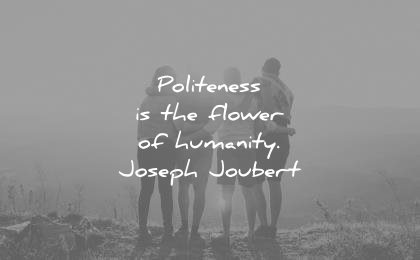 Politeness is the flower of humanity. Joseph Joubert 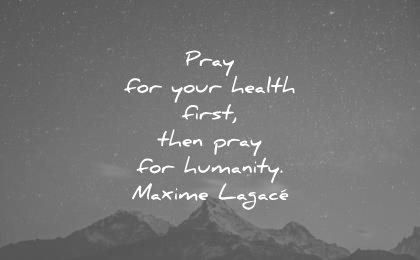 Pray for your health first, then pray for humanity. Maxime Lagacé 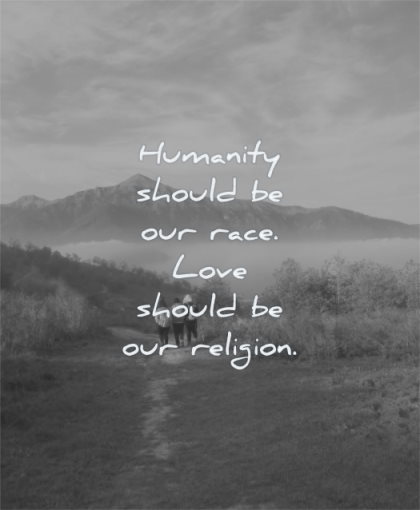 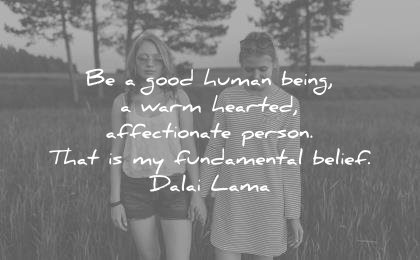 Be a good human being, a warm hearted, affectionate person. That is my fundamental belief. 14th Dalai Lama 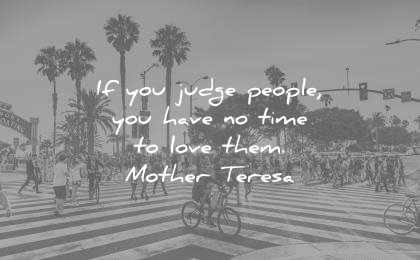 If you judge people, you have no time to love them. Mother Teresa 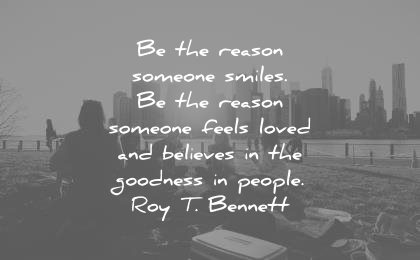 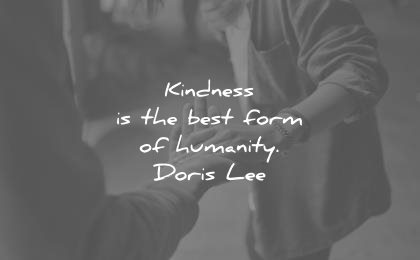 Kindness is the best form of humanity. Doris Lee 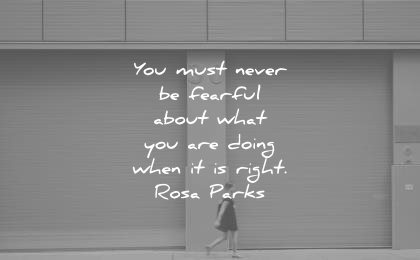 You must never be fearful about what you are doing when it is right. Rosa Parks 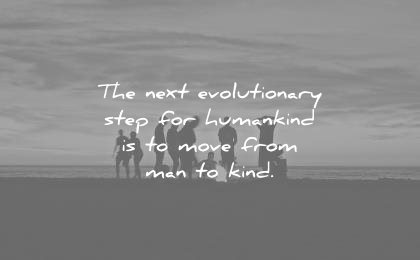 The next evolutionary step for humankind is to move from man to kind. Unknown 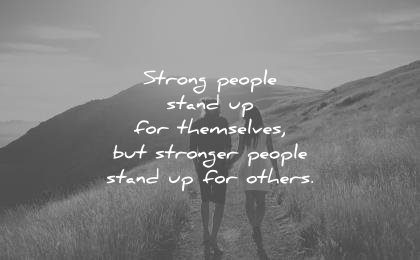 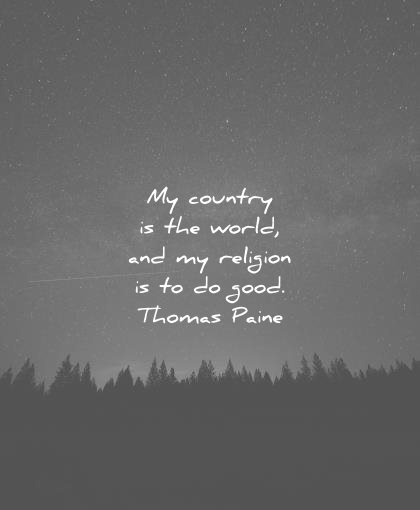 My country is the world, and my religion is to do good. Thomas Paine 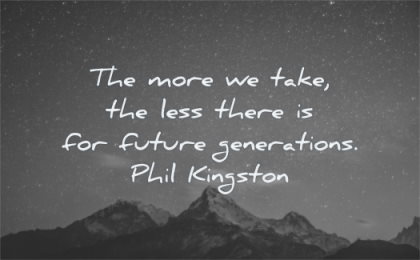 The more we take, the less there is for future generations. Phil Kingston 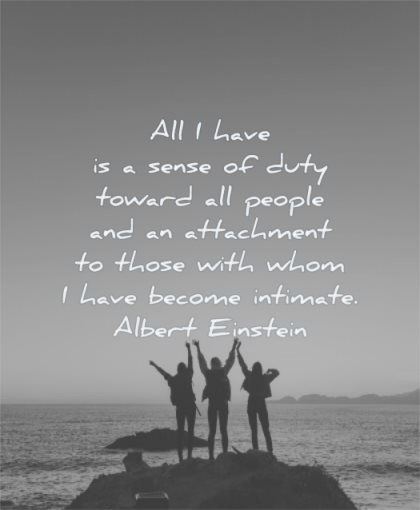 All I have is a sense of duty toward all people and an attachment to those with whom I have become intimate. Albert Einstein 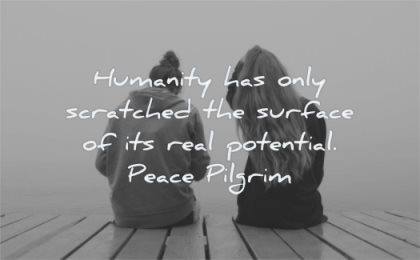 Humanity has only scratched the surface of its real potential. Peace Pilgrim 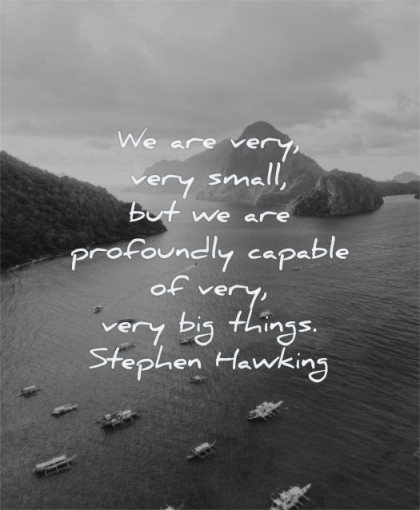 We are very, very small, but we are profoundly capable of very, very big things. Stephen Hawking 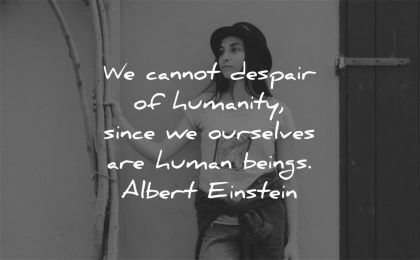 We cannot despair of humanity, since we ourselves are human beings. Albert Einstein

I’m not concerned with your liking or disliking me… All I ask is that you respect me as a human being. Jackie Robinson

Never discourage anyone who continually makes progress, no matter how slow. Plato

One book, one pen, one child, and one teacher can change the world. Malala Yousafzai

Moral courage is the highest expression of humanity. Ralph Nader

Each of us must work for his own improvement, and at the same time share a general responsibility for all humanity. Marie Curie 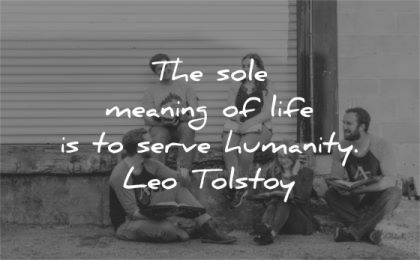 The sole meaning of life is to serve humanity. Leo Tolstoy

I don’t think of all the misery, but of the beauty that still remains. Anne Frank

Earth provides enough to satisfy every man’s need, but not every man’s greed. Mahatma Gandhi

The simplest way to be happy is to do good. Helen Keller

I’m for truth, no matter who tells it. I’m for justice, no matter who it is for or against. I’m a human being, first and foremost, and as such I’m for whoever and whatever benefits humanity as a whole. Malcolm X 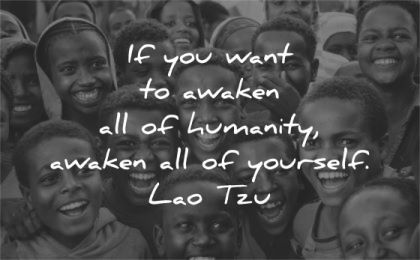 Praise what you want to see in the world. Maxime Lagacé

We have flown the air like birds and swum the sea like fishes, but have yet to learn the simple act of walking the earth like brothers. Martin Luther King Jr

We think too much and feel too little. More than machinery, we need humanity; more than cleverness, we need kindness and gentleness. Without these qualities, life will be violent and all will be lost. Charlie Chaplin

To be a man is to feel that one’s own stone contributes to building the edifice of the world. Antoine de Saint-Exupery

Do your little bit of good where you are; it’s those little bits of good put together that overwhelm the world. Desmond Tutu 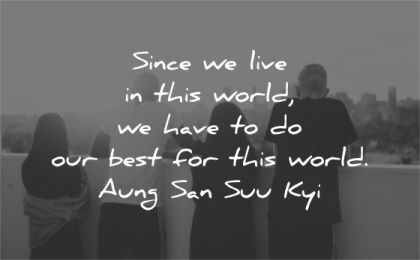 Since we live in this world, we have to do our best for this world. Aung San Suu Kyi

This is my creed: Happiness is the only good; reason the only torch; justice the only worship, humanity the only religion, and love the only priest. Robert Green Ingersoll

Great thoughts speak only to the thoughtful mind, but great actions speak to all mankind. Theodore Roosevelt

To think ill of mankind and not wish ill to them, is perhaps the highest wisdom and virtue. William Hazlitt

No religion is higher than humanity. Abdul Sattar Edhi

Humanity is so much more than the sum of humans. Unknown

Part 2. Humanity Quotes That Are…

The Most Famous Humanity Quotes 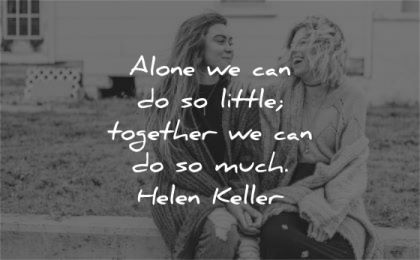 If we have no peace, it is because we have forgotten that we belong to each other. Mother Teresa

This is one small step for a man, one giant leap for mankind. Neil Armstrong

Humanity is an ocean; if a few drops of the ocean are dirty, the ocean does not become dirty. Mahatma Gandhi

The human race is just a chemical scum on a moderate-sized planet, orbiting around a very average star in the outer suburb of one among a hundred billion galaxies. We are so insignificant that I can’t believe the whole universe exists for our benefit. That would be like saying that you would disappear if I closed my eyes. Stephen Hawking

Embrace with tender affection the whole of humanity, especially the poorest, the weakest, the least important. Pope Francis 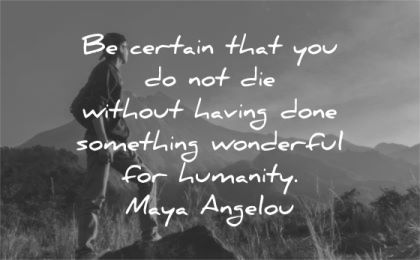 Be certain that you do not die without having done something wonderful for humanity. Maya Angelou

The great moral teachers of humanity were in a way artistic geniuses in the art of living. Albert Einstein

The world will not be destroyed by those who do evil, but by those who watch them without doing anything. Albert Einstein

The future of humanity is in our hands. 14th Dalai Lama

Our human compassion binds us the one to the other – not in pity or patronizingly but as human beings who have learnt how to turn our common suffering into hope for the future. Nelson Mandela

If our tears do not lead us to act then we have lost the reason of our humanity, which is compassion. 14th Dalai Lama

We may have different religions, different languages, different colored skin, but we all belong to one human race. We all share the same basic values. Kofi Annan

My friends, our challenge today is not to save Western civilization – or Eastern, for that matter. All civilization is at stake, and we can save it only if all peoples join together in the task. Kofi Annan

In the midst of economic recovery and global upheaval, disasters like this remind us of the common humanity that we share. Barack Obama (On Japan, March 17, 2011) 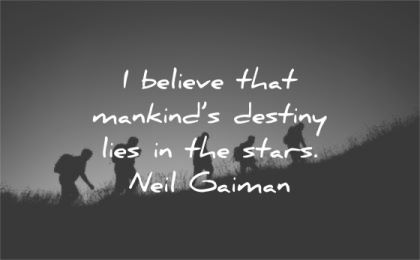 I believe that mankind’s destiny lies in the stars. Neil Gaiman

This is American leadership at its best. We stand with people who fight for their own freedom, and we rally other nations on behalf of our common security and common humanity. Barack Obama

The bond of our common humanity is stronger than the divisiveness of our fears and prejudices. Jimmy Carter

My humanity is bound up in yours, for we can only be human together. Desmond Tutu

Benevolence is the characteristic element of humanity. Confucius 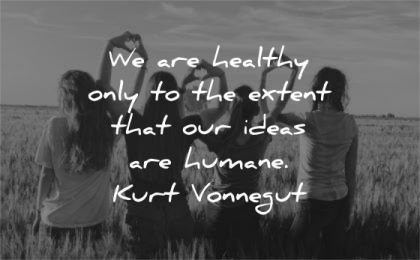 We are healthy only to the extent that our ideas are humane. Kurt Vonnegut

You must not lose faith in humanity. Mahatma Gandhi

The weak can never forgive. Forgiveness is the attribute of the strong. Mahatma Gandhi

The golden way is to be friends with the world and to regard the whole human family as one. Mahatma Gandhi

All labor that uplifts humanity has dignity and importance and should be undertaken with painstaking excellence. Martin Luther King Jr

We must all learn to live together as brothers or we will all perish together as fools. Because of our involvement in humanity we must be concerned about every human being. Martin Luther King Jr

Civilization began the first time an angry person cast a word instead of a rock. Sigmund Freud

Each person must live their life as a model for others. Rosa Parks 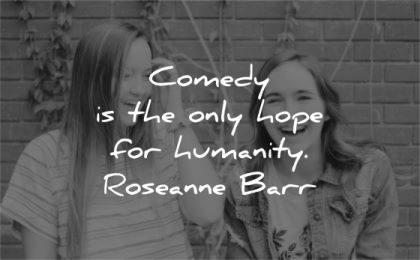 Comedy is the only hope for humanity. Roseanne Barr

Humanity needs to weep, and this is the time to weep. Pope Francis

Truth is on the side of the oppressed. Malcolm X

Above all else, we’re human. We’re one tribe. Lex Fridman (Source)

The moment we stop fighting for each other, that’s the moment that we lose our humanity. Adrian Hemlsley (In the movie “2012”) 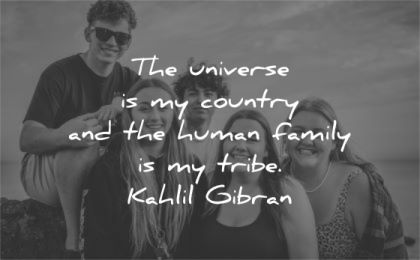 The universe is my country and the human family is my tribe. Kahlil Gibran

It’s all about humanity, humility, and integrity. Debra Wilson

We are not broken, we are just unfinished. Dawna Markova

Humanity is the virtue of a woman, generosity that of a man. Adam Smith

The more I see of man, the more I like dogs. Madame de Stael

Every step we take on earth brings us to a new world. Federico Garcia Lorca

You cannot hope to build a better world without improving the individuals. Marie Curie

My humanity is a constant self-overcoming. Friedrich Nietzsche 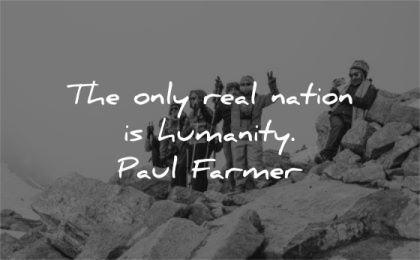 The only real nation is humanity. Paul Farmer

Be soft. Do not let the world make you hard. Unknown

You don’t need a reason to help people. Unknown

Sometimes a hug is worth more than a thousand words. Unknown

I am not a human being; I am a human becoming. Unknown

Be the reason someone smiles today. Unknown

Humanity is beautiful, even in the darkest times. Lex Fridman (Source) 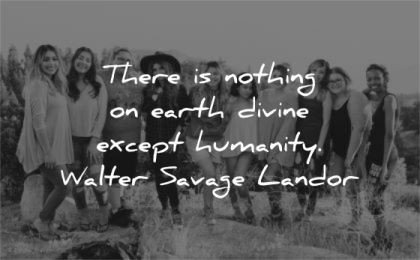 There is nothing on earth divine except humanity. Walter Savage Landor

The strides of humanity are slow, they can only be counted in centuries. Georg Buchner

The planet is fine. The people are fucked. George Carlin

I would never trust a man who didn’t cry. Norman Schwarzkopf

All of our humanity is dependent upon recognizing the humanity in others. Desmond Tutu

How far that little candle throws his beams! So shines a good deed in a weary world. William Shakespeare

Hope you liked these beautiful humanity quotes. If you did, please share them with one of your friends!

What gives you hope in humanity? What’s your favorite humanity quote? Please let us know in the comment section below!