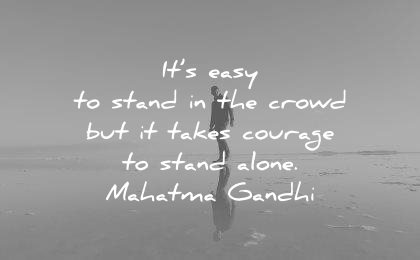 It’s easy to stand in the crowd but it takes courage to stand alone. Mahatma Gandhi 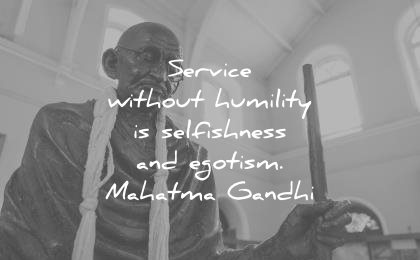 Service without humility is selfishness and egotism. Mahatma Gandhi 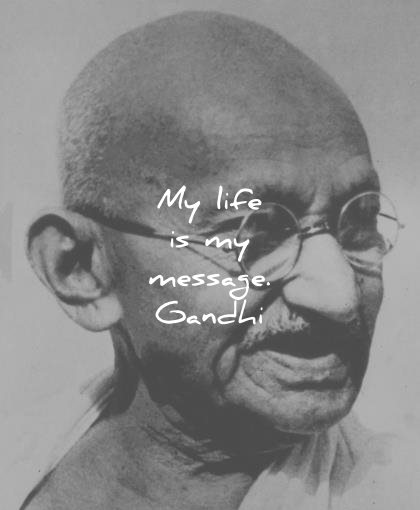 My life is my message. Mahatma Gandhi 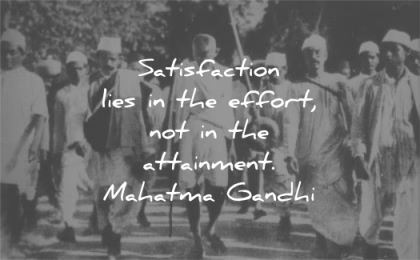 Satisfaction lies in the effort, not in the attainment. Mahatma Gandhi 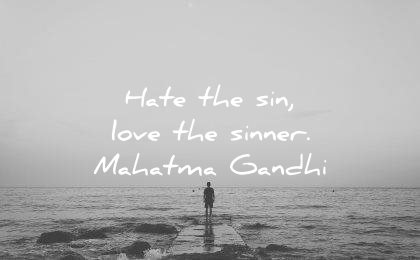 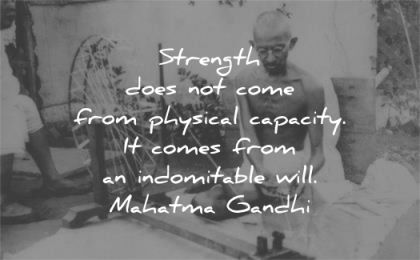 Strength does not come from physical capacity. It comes from an indomitable will. Mahatma Gandhi 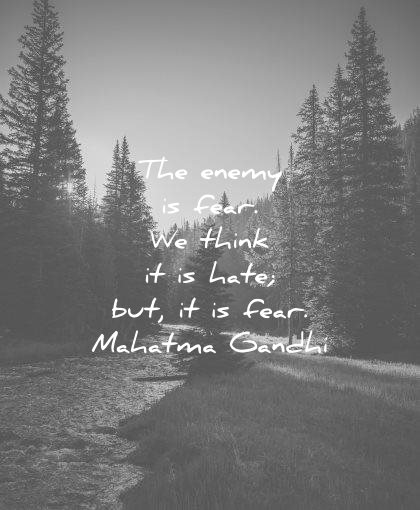 The enemy is fear. We think it is hate; but, it is fear. Mahatma Gandhi 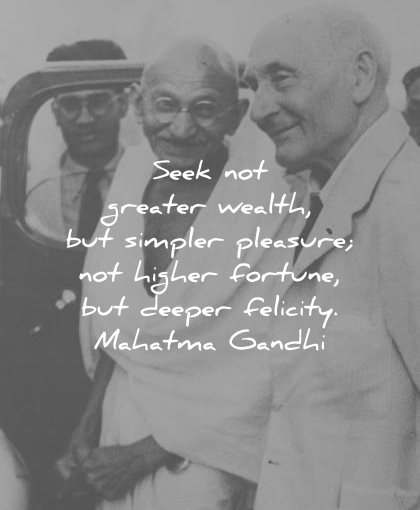 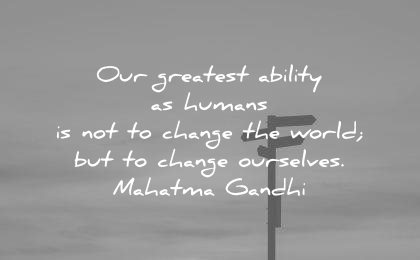 Our greatest ability as humans is not to change the world; but to change ourselves. Mahatma Gandhi 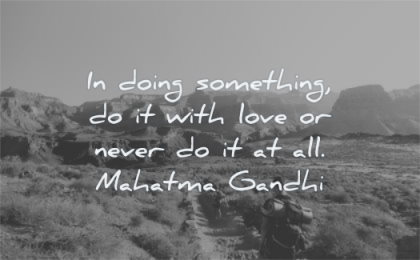 In doing something, do it with love or never do it at all. Mahatma Gandhi 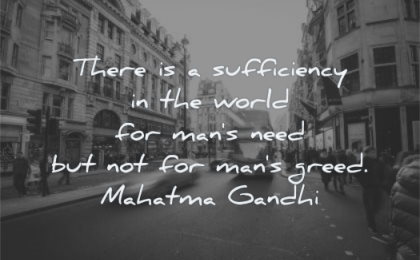 There is a sufficiency in the world for man’s need but not for man’s greed. Mahatma Gandhi 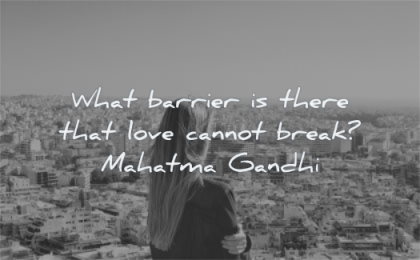 What barrier is there that love cannot break? Mahatma Gandhi 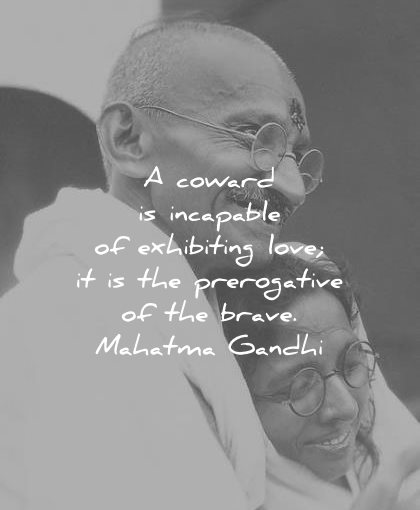 A coward is incapable of exhibiting love; it is the prerogative of the brave. Mahatma Gandhi 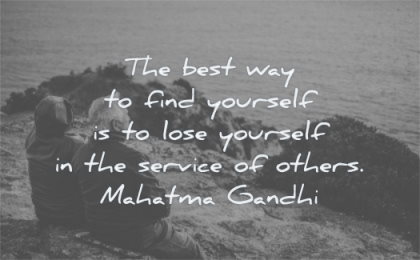 The best way to find yourself is to lose yourself in the service of others. Mahatma Gandhi 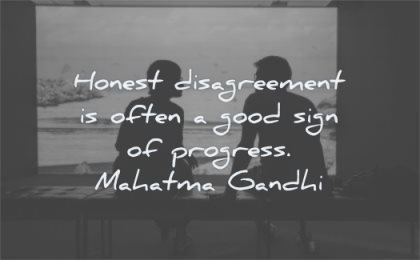 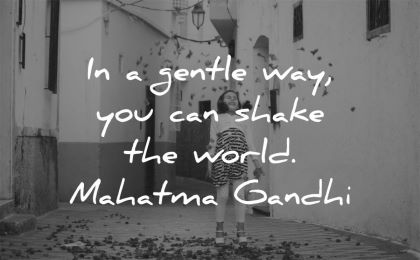 In a gentle way, you can shake the world.

The real ornament of woman is her character, her purity.

Man should forget his anger before he lies down to sleep.

Gentleness, self-sacrifice and generosity are the exclusive possession of no one race or religion.

They cannot take away our self-respect if we do not give it to them.

There is nothing that wastes the body like worry, and one who has any faith in God should be ashamed to worry about anything whatsoever.

A ‘No’ uttered from deepest conviction is better and greater than a ‘Yes’ merely uttered to please, or what is worse, to avoid trouble.

A man is but the product of his thoughts. What he thinks, he becomes.

Happiness is when what you think, what you say, and what you do are in harmony.

My faith is brightest in the midst of impenetrable darkness.

Truth without humility would be an arrogant caricature.

That service is the noblest which is rendered for its own sake.

Even if the paradise of material satisfactions, which they envisage as their final goal, were realize on earth, it would not bring mankind either contentment or peace. 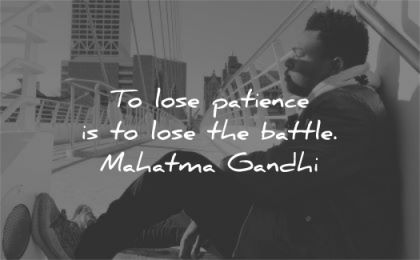 To lose patience is to lose the battle.

The difference between what we do and what we are capable of doing would suffice to solve most of the world’s problems.

I suppose leadership at one time meant muscles; but today it means getting along with people.

You must not lose faith in humanity. Humanity is an ocean; if a few drops of the ocean are dirty, the ocean does not become dirty.

It is unwise to be too sure of one’s own wisdom. It is healthy to be reminded that the strongest might weaken and the wisest might err.

You can chain me, you can torture me, you can even destroy this body, but you will never imprison my mind.

To give pleasure to a single heart by a single act is better than a thousand heads bowing in prayer.

Part 1. Man falls from the pursuit of the ideal of plan living and high thinking the moment he wants to multiply his daily wants.

Part 2. Man’s happiness really lies in contentment. He who is discontented, however much he possesses, becomes a slave to his desires.

It is the quality of our work which will please God and not the quantity.

Man becomes great exactly in the degree in which he works for the welfare of his fellow-men.

Part 2. Mahatma Gandhi Quotes That Are…

The Most Famous Mahatma Gandhi Quotes 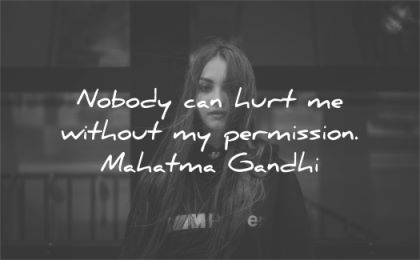 Nobody can hurt me without my permission.

Nonviolence is a weapon of the strong.

Faith is not something to grasp, it is a state to grow into.

The only tyrant I accept in this world is the still voice within.

The true measure of any society can be found in how it treats its most vulnerable members. 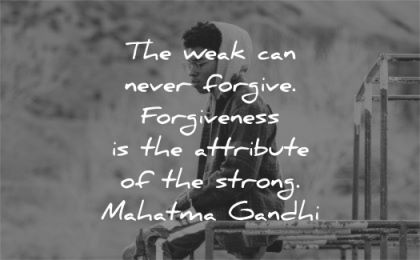 The weak can never forgive. Forgiveness is the attribute of the strong.

There is more to life than increasing its speed.

Peace is not the absence of conflict, but the ability to cope with it.

Prayer is the key of the morning and the bolt of the evening.

Fake Mahatma Gandhi Quotes (And Most Are Famous Too)

You must be the change you wish to see in the world. More info

An eye for an eye only ends up making the whole world blind. More info

Interviewer: “What do you think of Western Civilization?” Gandhi: “I think it would be a good idea”. More info

A customer is the most important visitor on our premises. More info 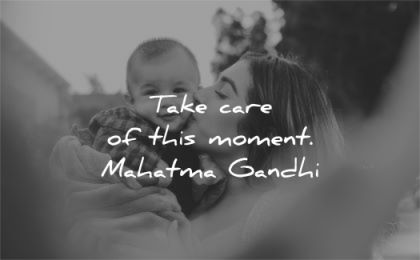 Take care of this moment.

Truth is one, paths are many.

Live simply so that others may simply live.

Commonsense is the realised sense of proportion.

The future depends on what you do today.

Doubt is invariably the result of want or weakness of faith.

God has no religion.

There is no ‘way to peace’, there is only ‘peace’. 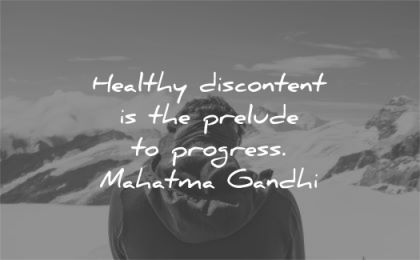 Healthy discontent is the prelude to progress.

Imitation is the sincerest flattery.

Fear has its use but cowardice has none.

Peace is its own reward.

Whatever I do is out of love. 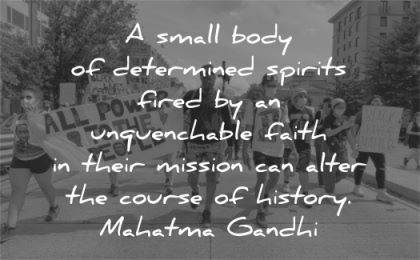 A small body of determined spirits fired by an unquenchable faith in their mission can alter the course of history.

I am a humble but very earnest seeker after truth.

Whatever you do may seem insignificant to you, but it is most important that you do it.

A nation’s culture resides in the hearts and in the soul of its people.

We may never be strong enough to be entirely nonviolent in thought, word and deed. But we must keep nonviolence as our goal and make strong progress towards it.

Each night, when I go to sleep, I die. And the next morning, when I wake up, I am reborn.

There is force in the universe, which, if we permit it, will flow through us and produce miraculous results. 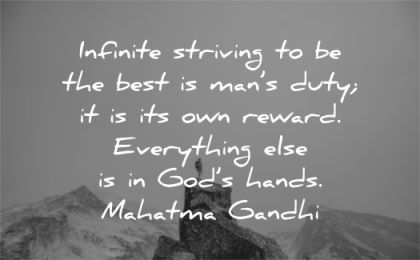 Infinite striving to be the best is man’s duty; it is its own reward. Everything else is in God’s hands.

Truth resides in every human heart, and one has to search for it there, and to be guided by truth as one sees it. But no one has a right to coerce others to act according to his own view of truth.

There are two days in the year that we can not do anything – yesterday and tomorrow.

Unwearied ceaseless effort is the price that must be paid for turning faith into a rich infallible experience.

Everyone who wills can hear the inner voice. It is within everyone. 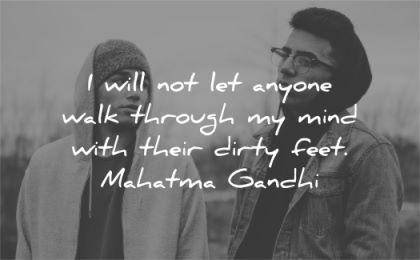 I will not let anyone walk through my mind with their dirty feet.

If by strength is meant moral power, then woman is immeasurably man’s superior. 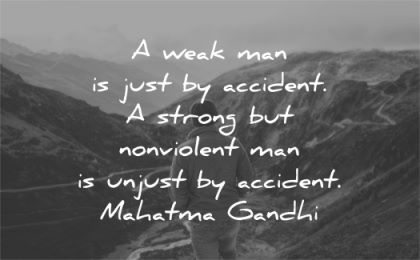 Speak only if it improves upon the silence.

There is no principle worth the name if it is not wholly good.

Nothing has saddened me so much in life as the hardness of heart of educated people.

Freedom is not worth having if it does not connote freedom to err.

It is better to be violent, if there is violence in our hearts, than to put on the cloak of nonviolence to cover impotence.

A principle is the expression of perfection, and as imperfect beings like us cannot practise perfection, we devise every moment limits of its compromise in practice.

It is any day better to stand erect with a broken and bandaged head then to crawl on one’s belly, in order to be able to save one’s head.

Study not man in his animal nature – man following the laws of the jungle – but study man in all his glory.

Before the throne of the Almighty, man will be judged not by his acts but by his intentions. For God alone reads our hearts.

I have also seen children successfully surmounting the effects of an evil inheritance. That is due to purity being an inherent attribute of the soul.

The rich cannot accumulate wealth without the co-operation of the poor in society.

There are people in the world so hungry, that God cannot appear to them except in the form of bread.

The human voice can never reach the distance that is covered by the still small voice of conscience.

Rights that do not flow from duty well performed are not worth having.

If I had no sense of humor, I would long ago have committed suicide.

Related: How did Gandhi die? (wikipedia.org) 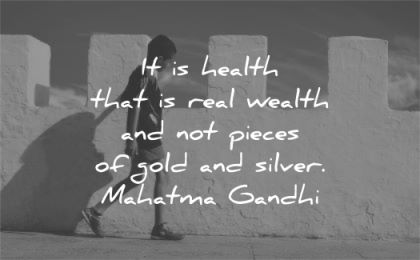 It is health that is real wealth and not pieces of gold and silver.

Anger is the enemy of nonviolence and pride is a monster that swallows it up.

The golden rule of conduct is mutual toleration, seeing that we will never all think alike and we shall always see Truth in fragment and from different points of vision.”

The roots of violence: Wealth without work, pleasure without conscience, knowledge without character, commerce without morality, science without humanity, worship without sacrifice, politics without principles.

Capital as such is not evil; it is its wrong use that is evil. Capital in some form or other will always be needed.

Man often becomes what he believes himself to be. If I keep on saying to myself that I cannot do a certain thing, it is possible that I may end by really becoming incapable of doing it.

If I have the belief that I can do it, I shall surely acquire the capacity to do it even if I may not have it at the beginning.

Faith… must be enforced by reason… when faith becomes blind it dies.

Action is no less necessary than thought to the instinctive tendencies of the human frame. 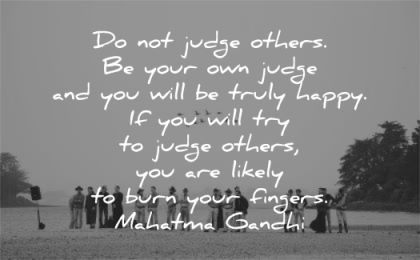 Do not judge others. Be your own judge and you will be truly happy. If you will try to judge others, you are likely to burn your fingers.

The Seven Sins are: Wealth without work. Pleasure without conscience. Knowledge without character. Commerce without morality. Science without humanity. Religion without sacrifice. Politics without principle. Related: https://en.wikipedia.org/wiki/Seven_Social_Sins

There is a higher court than courts of justice and that is the court of conscience. It supercedes all other courts.

Morality which depends upon the helplessness of a man or woman has not much to recommend it. Morality is rooted in the purity of our hearts.

Just as a man would not cherish living in a body other than his own, so do nations not like to live under other nations, however noble and great the latter may be.

Increase of material comforts, it may be generally laid down, does not in any way whatsoever conduce to moral growth.

A man of few words will rarely be thoughtless in his speech; he will measure every word.