Here are 121 of the best fear quotes I could find. And my goal is simple: to inspire you and make you more courageous. You’ll discover quotes by Bruce Lee, Einstein, Gandhi, and more. Enjoy! 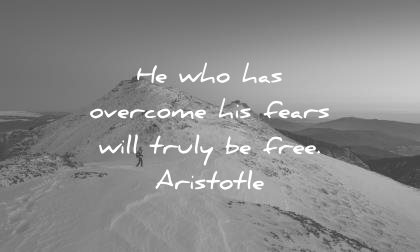 He who has overcome his fears will truly be free. Aristotle 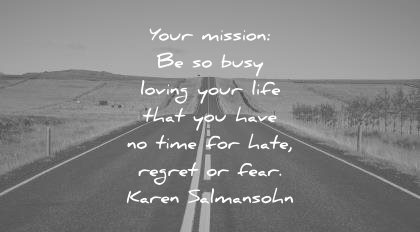 Your mission: Be so busy loving your life that you have no time for hate, regret or fear. Karen Salmansohn 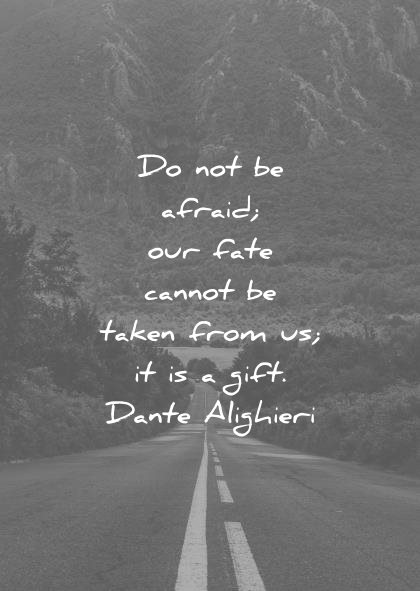 Do not be afraid; our fate cannot be taken from us; it is a gift. Dante Alighieri 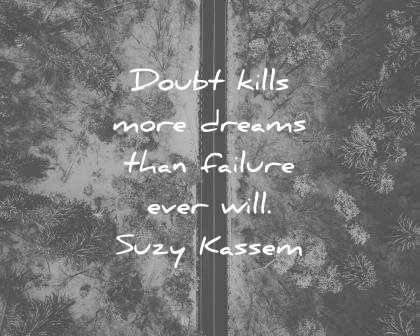 Doubt kills more dreams than failure ever will. Suzy Kassem 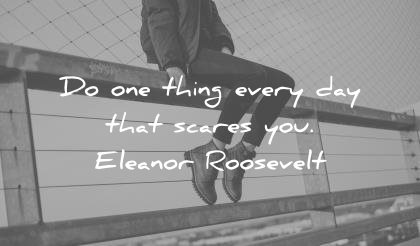 Do one thing every day that scares you. Eleanor Roosevelt 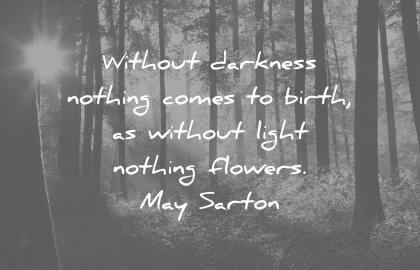 Without darkness nothing comes to birth, as without light nothing flowers. May Sarton 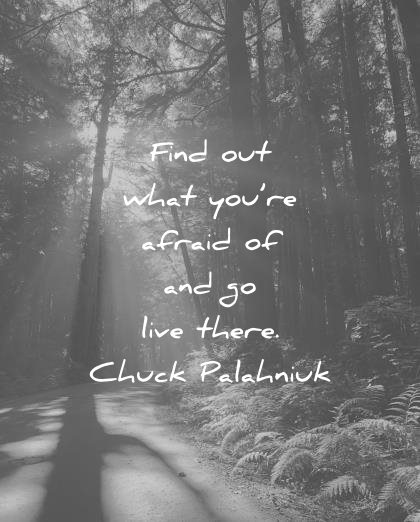 Find out what you’re afraid of and go live there. Chuck Palahniuk 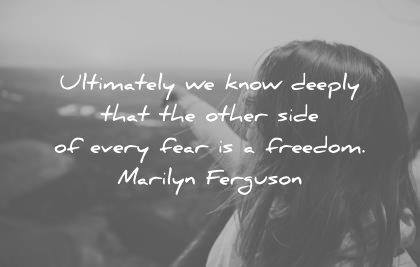 Ultimately we know deeply that the other side of every fear is a freedom. Marilyn Ferguson 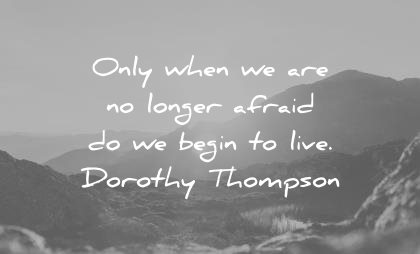 Only when we are no longer afraid do we begin to live. Dorothy Thompson 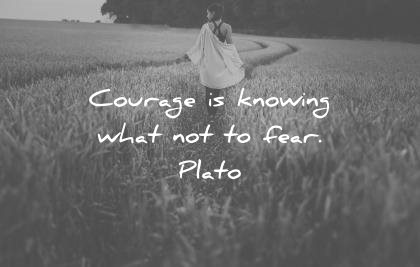 Courage is knowing what not to fear. Plato 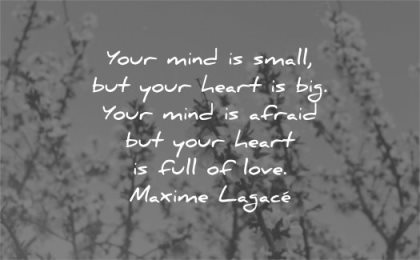 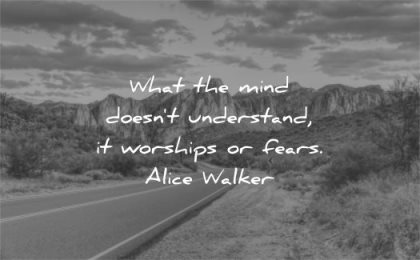 What the mind doesn’t understand, it worships or fears. Alice Walker 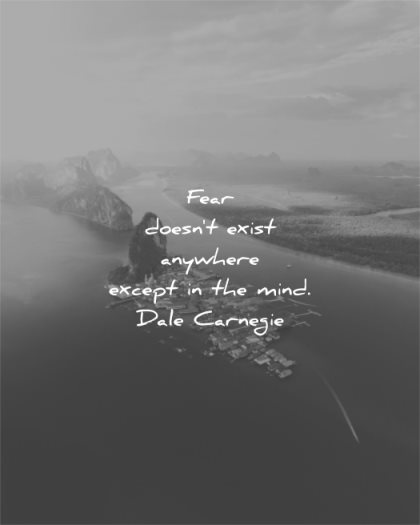 Fear doesn’t exist anywhere except in the mind. Dale Carnegie 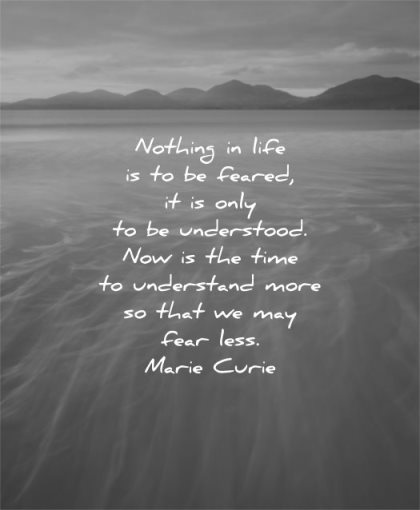 Nothing in life is to be feared, it is only to be understood. Now is the time to understand more so that we may fear less. Marie Curie 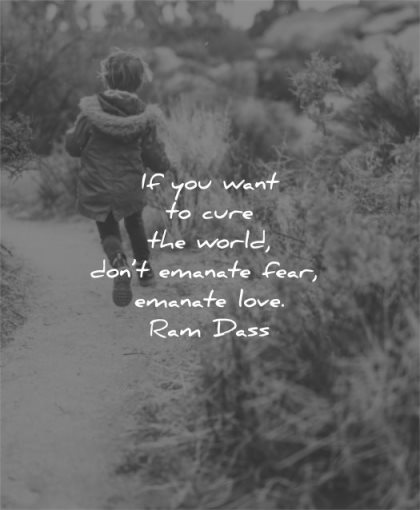 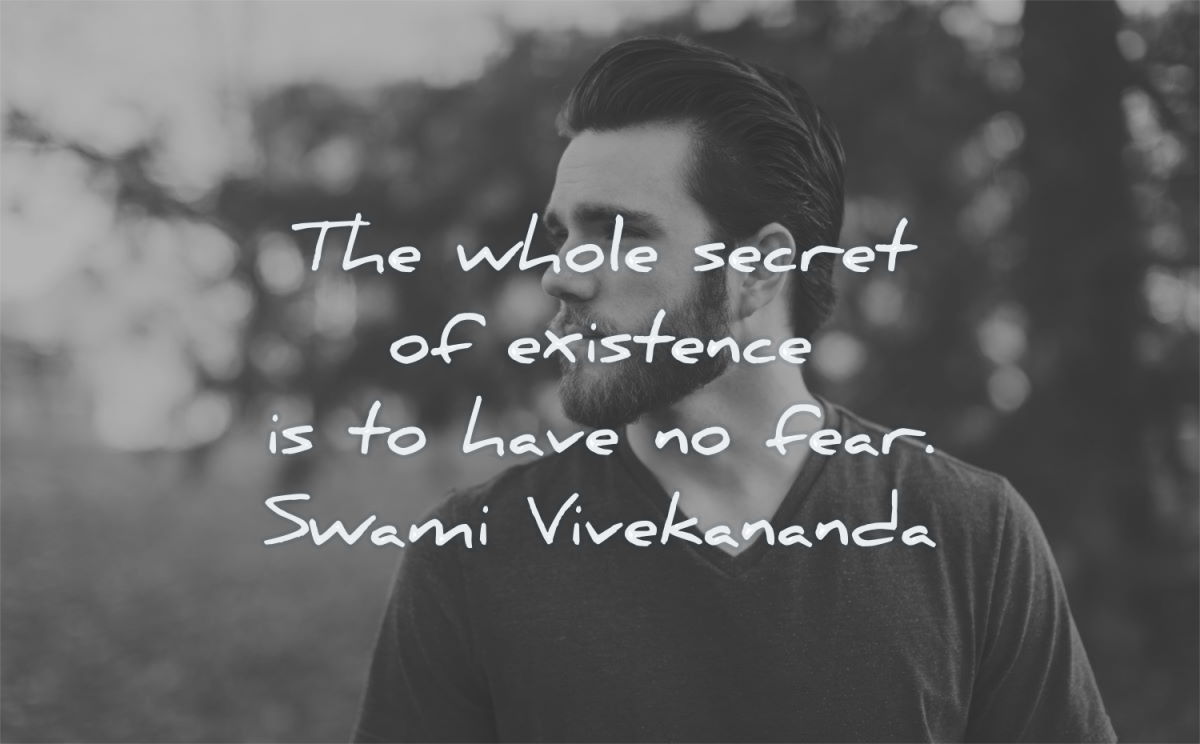 The whole secret of existence is to have no fear. Swami Vivekananda

Cease to hope and you will cease to fear. Hecato

A man who fears suffering is already suffering from what he fears. Michel de Montaigne

I was never afraid of failure; for I would sooner fail than not be among the greatest. John Keats

They lose the day in expectation of the night, and the night in fear of the dawn. Seneca 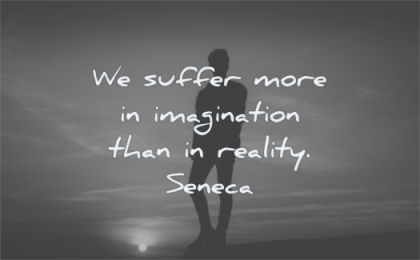 Being scared is part of being alive. Accept it. Walk through it. Robin Sharma

The fears we don’t face becomes our limits. Robin Sharma

Everything you want is on the other side of fear. Jack Canfield

Fear has a large shadow, but he himself is small. Ruth Gendler

Your fears are a kind of prison that confines you within a limited range of action. The less you fear, the more power you will have and the more fully you will live. Robert Greene

Observe yourself. See how you push away unpleasant thoughts, delay important decisions, postpone difficult conversations and avoid hard tasks. Observe how you avoid discomfort and take refuge in comforting distractions. Self observation is the beginning of self transformation. @TheAncientSage 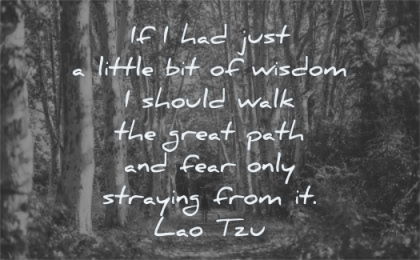 If I had just a little bit of wisdom I should walk the great path and fear only straying from it. Lao Tzu

Never let the future disturb you. You will meet it, if you have to, with the same weapons of reason which today arm you against the present. Marcus Aurelius

There can be no initiative if one has fear, and fear compels us to cling to tradition, gurus, etc. Bruce Lee

Our greatest fear should not be of failure, but of succeeding at something that doesn’t really matter. D. L. Moody

For life to be really fun, what you fear should line up with what you desire. Nassim Nicholas Taleb

What you are afraid to do is a clear indication of the next thing you need to do. Ralph Waldo Emerson

Courage is not the absence of fear, but rather the judgment that something else is more important than fear. Ambrose Redmoon 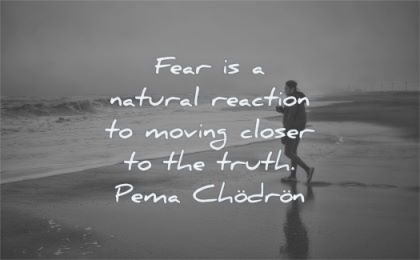 Fear is a natural reaction to moving closer to the truth. Pema Chödrön

Fear is pain arising from the anticipation of evil. Aristotle

Fear itself is a creation of your mind. It does not exist independently. Since it is a fabrication, you don’t have to fight it. Just understand it. Understanding is the key to freedom. @TheAncientSage

Fear is the enemy of logic. Frank Sinatra

Part 2. Fear Quotes That Are…

The Most Famous Fear Quotes

Searching for a famous fear quote? Check out those by Seneca, Emerson, Einstein, Gandhi, etc. 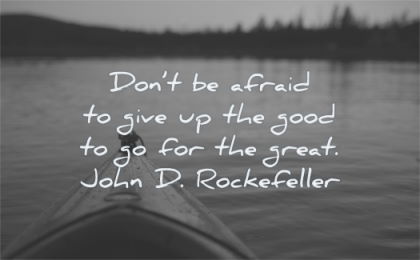 Don’t be afraid to give up the good to go for the great. John D. Rockefeller

Instead of harboring fear and suspicion we need to think of other people not as ‘them’ but ‘us’. Dalai Lama

Never let the fear of striking out keep you from playing the game. Babe Ruth

If people are good only because they fear punishment, and hope for reward, then we are a sorry lot indeed. Albert Einstein

Now’s not the time for fear. That comes later. Bane (Batman)

Limits, like fear, is often an illusion. Michael Jordan

Thinking will not overcome fear but action will. W. Clement Stone

Extreme fear can neither fight nor fly. William Shakespeare 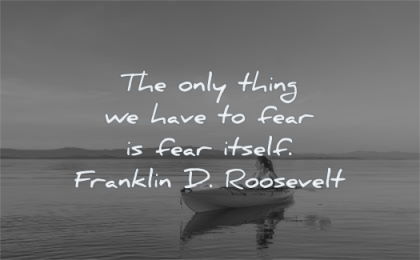 The only thing we have to fear is fear itself. Franklin D. Roosevelt

Courage is resistance to fear, mastery of fear, not absence of fear. Mark Twain

Beware; for I am fearless, and therefore powerful. Mary Shelley (Frankenstein)

Courage is the power of the mind to overcome fear. Martin Luther King Jr

I learned that courage was not the absence of fear, but the triumph over it. The brave man is not he who does not feel afraid, but he who conquers that fear. Nelson Mandela

Do that which you fear to do and the fear will die. Ralph Waldo Emerson

The scariest moment is always just before you start. After that, things can only get better. Stephen King 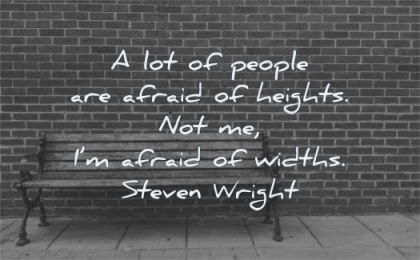 A lot of people are afraid of heights. Not me, I’m afraid of widths. Steven Wright

You gain strength, courage, and confidence by every experience in which you really stop to look fear in the face. You must do the thing which you think you cannot do. Eleanor Roosevelt

You can’t make decisions based on fear and the possibility of what might happen. Michelle Obama

It is weakness which breeds fear, and fear breeds distrust. Mahatma Gandhi

Have no fear of perfection – you’ll never reach it. Salvador Dali 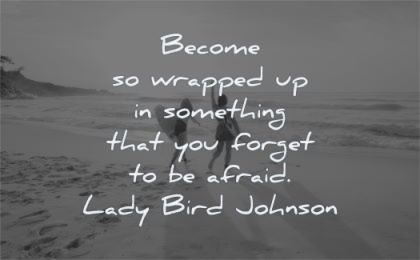 Become so wrapped up in something that you forget to be afraid. Lady Bird Johnson

Move towards what scares you. Tom Bilyeu

Being scared is fine. Not taking action is not. Maxime Lagacé

There is no illusion greater than fear. Lao Tzu

Some things are in our control and others not. Epictetus

There is no truth in a fear-based culture. Tyler Winklevoss (Source)

A fighter has to know fear. Cus D’Amato

Fear is a mile high, a mile wide, and paper thin. Unknown

I’m intimidated by the fear of being average. Taylor Swift 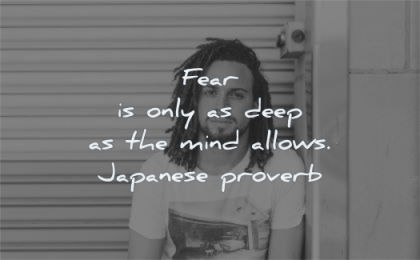 Fear is only as deep as the mind allows. Japanese proverb

Don’t let your heart be colonized by fear. Jack Kornfield

Of all the hazards, fear is the worst. Sam Snead (Professional golfer)

How very little can be done under the spirit of fear. Florence Nightingale

Always do what you’re afraid to do. E. Lockhart 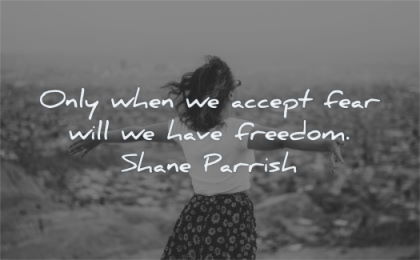 Only when we accept fear will we have freedom. Shane Parrish

Two elements must therefore be rooted out once for all, – the fear of future suffering, and the recollection of past suffering; since the latter no longer concerns me, and the former concerns me not yet. Seneca

Focus on where you want to go, not on what you fear. Tony Robbins

Run from what’s comfortable. Forget safety. Live where you fear to live. Destroy your reputation. Be notorious. I have tried prudent planning long enough. From now on I’ll be mad. Rumi 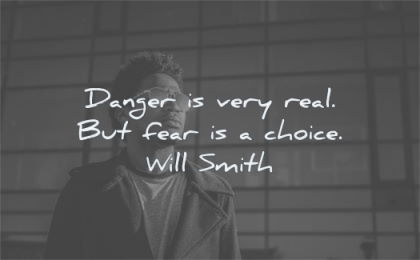 Danger is very real. But fear is a choice. Will Smith

I must not fear. Fear is the mind-killer. Fear is the little-death that brings total obliteration. I will face my fear. Frank Herbert

You gotta act. And you’ve gotta be willing to fail, you gotta be ready to crash and burn, with people on the phone, with starting a company, with whatever. If you’re afraid of failing, you won’t get very far. Steve Jobs

Feel the fear and do it anyway. Susan Jeffers

Face your fears, pursue your ambitions, and become the hero you are destined to be. Josh Kaufman

My formula for greatness in a human being is amor fati: that one wants nothing to be different, not forward, not backward, not in all eternity. Not merely bear what is necessary, still less conceal it… but love it. Friedrich Nietzsche (More about “amor fati” or “love of fate” in this YouTube video)

The beautiful thing about fear is, when you run to it, it runs away. Robin Sharma

Being aware of your fear is smart. Overcoming it is the mark of a successful person. Seth Godin

You can get anything you want if you can get past fear. Barbara Corcoran (Source) 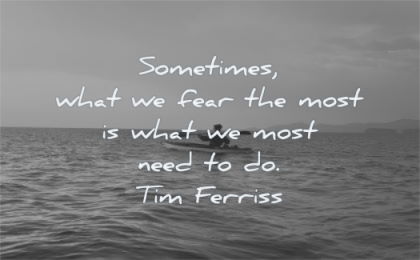 Sometimes, what we fear the most is what we most need to do. Tim Ferriss

Run after your fears. Chase them. Make them shake. And dread the day you gained enough confidence to realize they were full of shit. Thibaut

It’s believing in our dreams and facing our fears head on that allows us to live our lives beyond limits. Amy Purdy

There is nothing worth doing that is not scary. There is no one who has achieved greatness without wrestling with their own doubts, anxieties, limitations, and demons. Ryan Holiday

Don’t give in to your fears. If you do, you won’t be able to talk to your heart. Paulo Coelho

If you’re are paralyzed with fear it’s a good sign. It shows you what you have to do. Steven Pressfield

The day which we fear as our last is but the birthday of eternity. Seneca

Our deepest fear is not that we are inadequate. Our deepest fear is that we are powerful beyond measure. It is our light, not our darkness that most frightens us. We ask ourselves, who am I to be brilliant, gorgeous, talented, and fabulous? Actually, who are you not to be? You are a child of God. Your playing small does not serve the world. There is nothing enlightened about shrinking so that other people will not feel insecure around you. We are all meant to shine, as children do. We were born to make manifest the glory of God that is within us. It is not just in some of us; it is in everyone and as we let our own light shine, we unconsciously give others permission to do the same. As we are liberated from our own fear, our presence automatically liberates others. Marianne Williamson Click to tweet

I must not fear. Fear is the mind-killer. Fear is the little-death that brings total obliteration. I will face my fear. I will permit it to pass over me and through me. And when it has gone past, I will turn the inner eye to see its path. Where the fear has gone there will be nothing. Only I will remain. Bene Gesserit

Hope you enjoyed these beautiful fear quotes. If you did like the quotes, please share them with a friend today!

What’s holding you back? What’s your favorite fear quote? Please let us know in the comment section below!