Here are 79 of the most inspiring suffering quotes I could find. And the goal is simple: to help you get relief from the burden you’re feeling. You’ll discover quotes by Jordan Peterson, Seneca, Epictetus, and more. Enjoy! 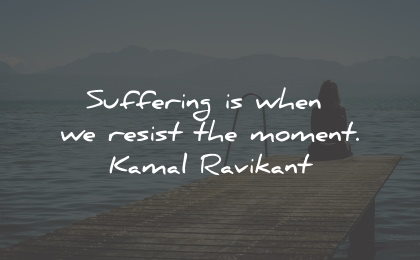 Suffering is when we resist the moment. Kamal Ravikant 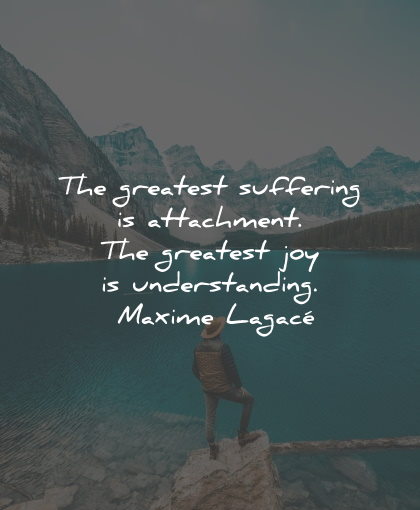 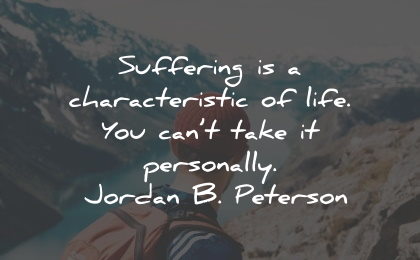 Suffering is a characteristic of life. You can’t take it personally. Jordan B. Peterson 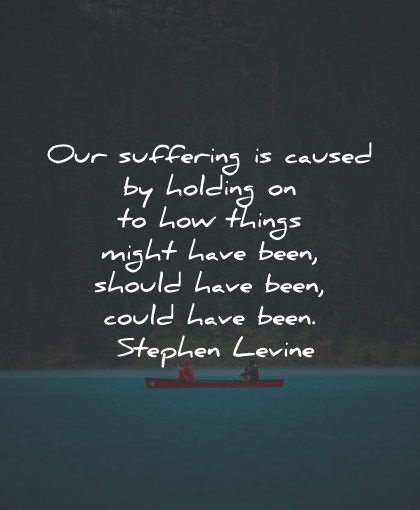 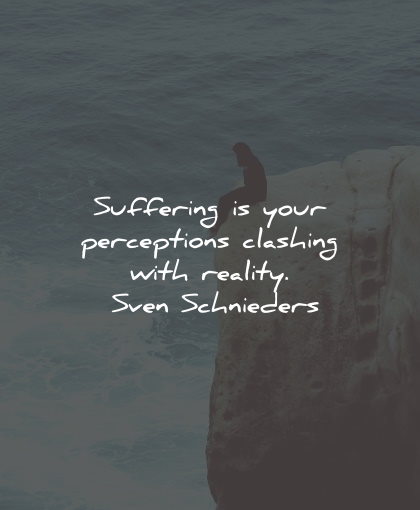 Suffering is your perceptions clashing with reality. Sven Schnieders 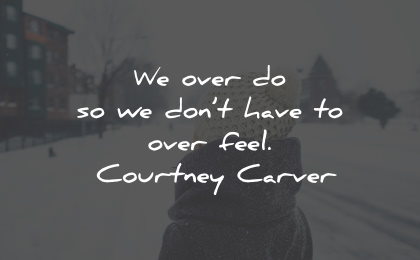 We over do so we don’t have to over feel. Courtney Carver 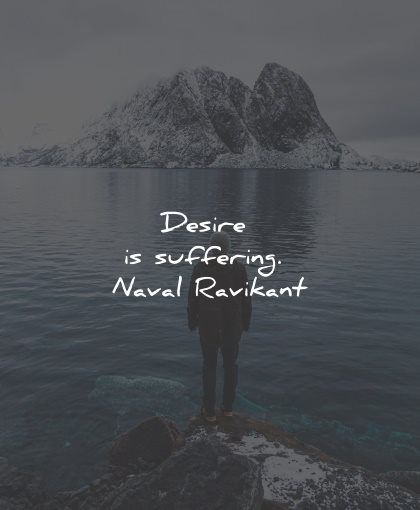 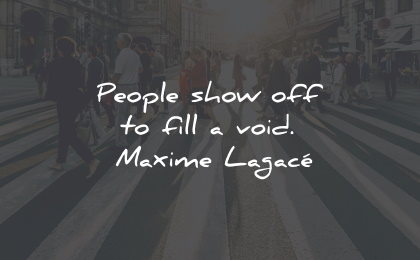 People show off to fill a void. Maxime Lagacé 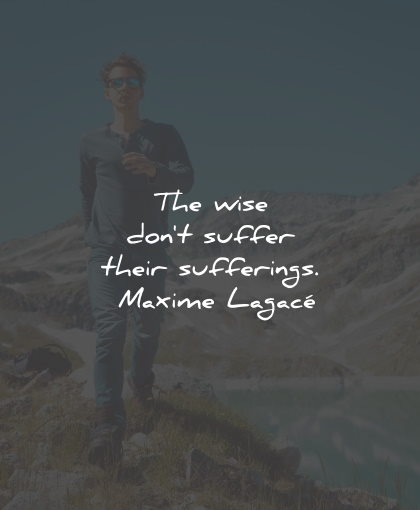 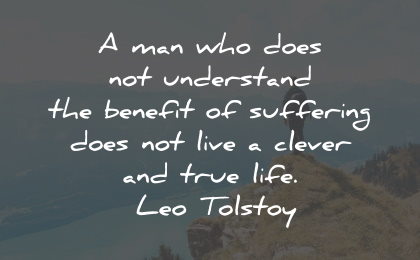 A man who does not understand the benefit of suffering does not live a clever and true life. Leo Tolstoy 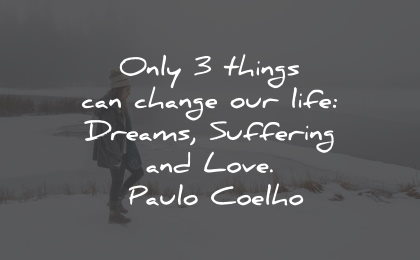 Only 3 things can change our life: Dreams, Suffering and Love. Paulo Coelho 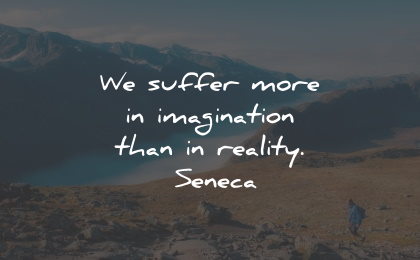 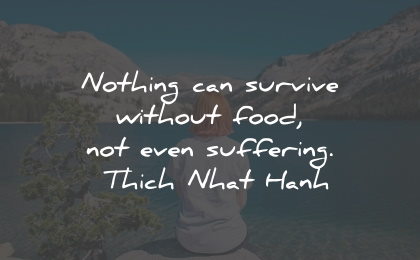 Nothing can survive without food, not even suffering. Thich Nhat Hanh 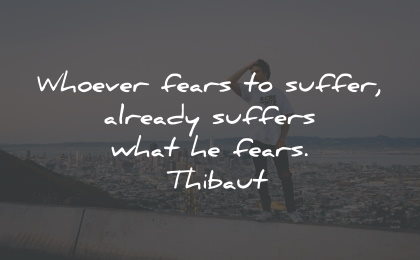 Whoever fears to suffer, already suffers what he fears. Thibaut 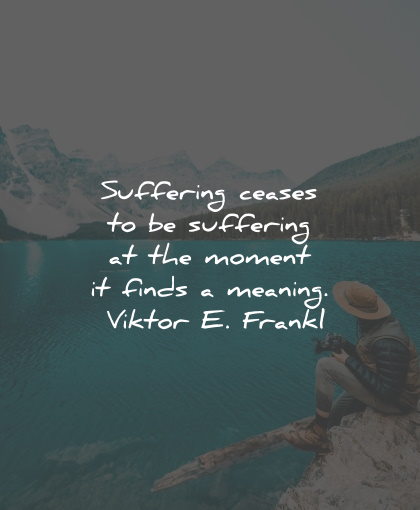 Suffering ceases to be suffering at the moment it finds a meaning. Viktor E. Frankl (Man’s Search for Meaning, Amazon book)

The truth is, everyone is going to hurt you. You just got to find the ones worth suffering for. Bob Marley

Be grateful in spite of your suffering. Jordan B. Peterson (Source)

The purpose of life, as far as I can tell, is to find a mode of being that’s so meaningful that the fact that life is suffering is no longer relevant. Jordan B. Peterson

I simply want people to know that there is a way out of suffering. Byron Katie 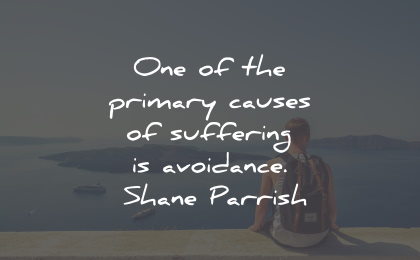 One of the primary causes of suffering is avoidance. Shane Parrish (Source)

Learn to accept discomfort and uncertainty. It will eliminate most of your imagined suffering. Neil Strauss

You suffer because you expect. Maxime Lagacé

To live is to suffer, to survive is to find some meaning in the suffering. Friedrich Nietzsche

You can suffer greatly but still have a great life. You can suffer little and have a meaningless life. Suffering has less to do with it than we think. Mark Manson 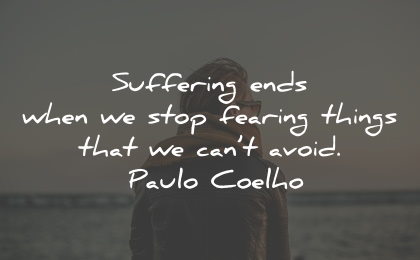 We need to strengthen our foundation of joy and happiness before focusing on our suffering. Thich Nhat Hanh

Problems get easier when you turn them around. Rather than ask what you can do to be happy, avoid all the things that make you miserable. Shane Parrish

When you welcome suffering and no longer hide from it, nothing can take away your peace of mind. No matter what happens to you, you know that you will be able to endure it. Darius Foroux

The greatest sources of our suffering are the lies we tell ourselves. Elvin Semrad 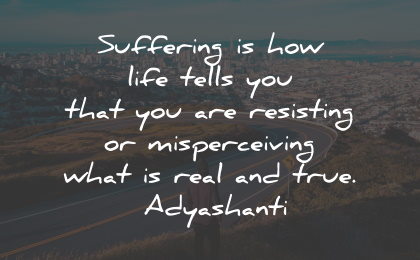 Suffering is how life tells you that you are resisting or misperceiving what is real and true. Adyashanti

A man will give up almost anything except his suffering. John Cleese

On our earth we can only love sincerely with suffering and through suffering. We do not know how to love any other way and know no other love. Fyodor Dostoevsky

It may look as if the situation is creating the suffering, but ultimately this is not so – your resistance is. Eckhart Tolle

Suffering is great because when you suffer, you’re forced to see the truth for what it is. Naval Ravikant

The most fulfilling human projects appeared inseparable from a degree of torment, the sources of our greatest joys lying awkwardly close to those of our greatest pains. Alain de Botton (The Consolations of Philosophy, Amazon book)

It is perhaps when our lives are at their most problematic that we are likely to be most receptive to beautiful things. Alain de Botton 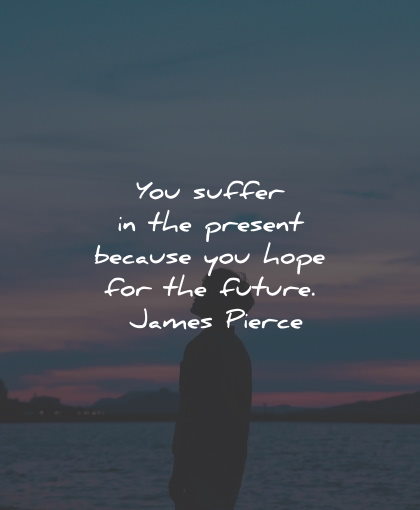 You suffer in the present because you hope for the future. James Pierce (Source)

We may be happy enough with little if little is what we have come to expect, and we may be miserable with much when we have been taught to desire everything. Alain de Botton

Whenever I see a person suffering from nervousness, I think, well, what can he expect? If he had not set his sights on things outside man’s control, his nervousness would end at once. Epictetus

My advice to the person suffering from lack of time and from apathy is this: Seek out each day as many as possible of the small joys. Hermann Hesse 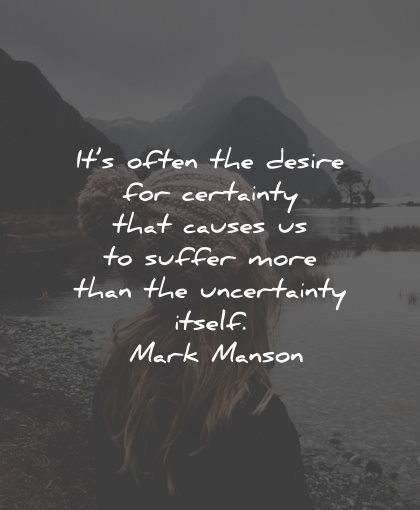 It’s often the desire for certainty that causes us to suffer more than the uncertainty itself. Mark Manson

This is suffering’s lesson: pay attention. The important part might come in a form you do not recognize. Sarah Manguso

The ego could be defined simply in this way: a dysfunctional relationship with the present moment. Eckhart Tolle

We are bathing in mystery and confusion on many subjects, and I think that will always be our destiny. The universe will always be much richer than our ability to understand it. Carl Sagan

One of the deepest habitual patterns that we have is to feel that now is not good enough. Pema Chödrön

The root of suffering is attachment. Buddha

All problems are personal, which simply means, you create your own suffering. Brian Thompson 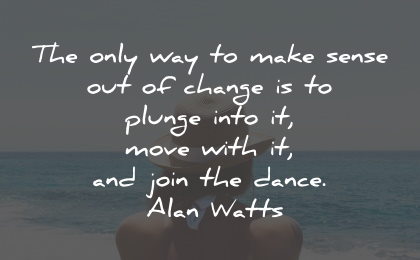 The only way to make sense out of change is to plunge into it, move with it, and join the dance. Alan Watts

The things that you consider to be “yours” own you far more than you own them. James Pierce

You don’t need to unwind so much as you need to discover why you are “wound” in the first place. James Pierce

Intellectuals are those who understand and can speak about a topic at multiple levels of granularity. Andrew Huberman (Source)

When another person makes you suffer, it is because he suffers deeply within himself, and his suffering is spilling over. He does not need punishment; he needs help. That’s the message he is sending. Thich Nhat Hanh

Recognizing the futility of happiness, the wise man drops the search. In dropping the search, life loses the power to make him miserable. James Pierce 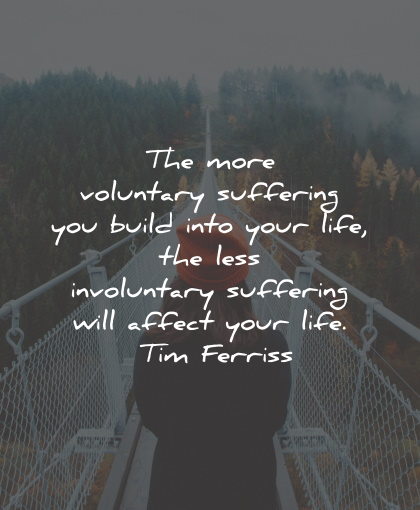 Suffering is given to you that you might open your eyes to the truth. Anthony de Mello

Your suffering is never caused by the person you are blaming. Byron Katie

You know quite well, deep within you, that there is only a single magic, a single power, a single salvation… and that is called loving. Well, then, love your suffering. Do not resist it, do not flee from it. It is your aversion that hurts, nothing else. Herman Hesse

Suffering is nothing but experience enslaved to ignorance. 14th Dalai Lama

Reports of suffering are upsetting, but it’s a mistake to think we can do nothing about it. Many problems we face are of our own making. Since we are social animals who need friends, the least we can do is smile and respond to others warm-heartedly — that will make a difference. 14th Dalai Lama

What we wish to be true clouds our perception of what is true. Suffering is that moment when we can no longer deny reality. Naval Ravikant 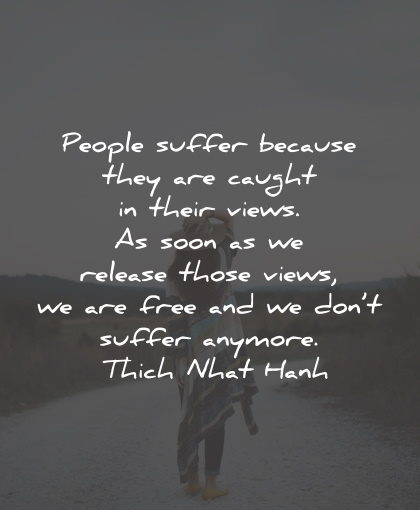 People suffer because they are caught in their views. As soon as we release those views, we are free and we don’t suffer anymore. Thich Nhat Hanh

You suffer because your mind is attached to something. Maxime Lagacé

Common humanity: recognizing that all human beings suffer and are imperfect. Kristen Neff

The main affliction of our modern civilization is that we don’t know how to handle the suffering inside us and we try to cover it up with all kinds of consumption. Thich Nhat Hanh (No Mud, No Lotus: The Art of Transforming Suffering, Amazon book)

Without suffering, there’s no happiness. So we shouldn’t discriminate against the mud. We have to learn how to embrace and cradle our own suffering and the suffering of the world, with a lot of tenderness. Thich Nhat Hanh

People have a hard time letting go of their suffering. Out of a fear of the unknown, they prefer suffering that is familiar. Thich Nhat Hanh

Whatever you are seeking, all becomes suffering. It is better to have nothing further to seek. Rinzai 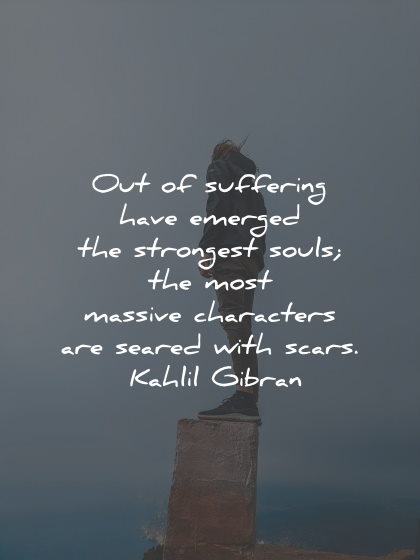 Out of suffering have emerged the strongest souls; the most massive characters are seared with scars. Kahlil Gibran

The longer you avoid voluntary discomfort, the longer you’ll have to endure mandatory suffering. Ed Latimore

When you recognize who you are, suffering and struggle will be gone, and fear and negativity will dissolve. The mind will quiet. You will be filled with joy, positivity, fulfillment, a sense of abundance, and an imperturbable peace. Rhonda Byrne (Source)

Suffering is a moment of clarity, when you can no longer deny the truth of a situation and are forced into uncomfortable change. Inside suffering is the seed of change. Naval Ravikant

Most of the gains in life come from suffering in the short term, so you can get paid in the long term. Naval Ravikant 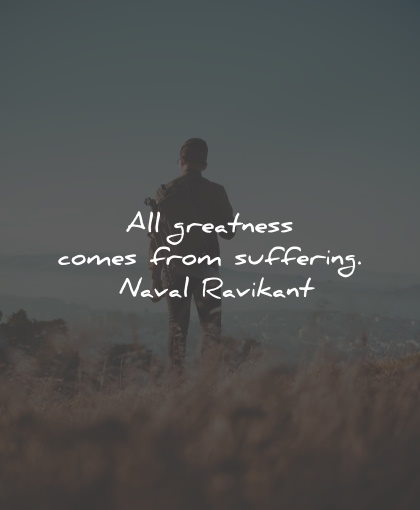 And remember, if you want to suffer less, simply expect less. The only thing you control is the process, not the results.

Are you suffering right now? What’s your favorite suffering quote? Please let us know in the comment section below!