Here are 100 of the best music quotes I could find. Hope you’ll find beautiful and inspiring words that will fuel your soul for the day. You’ll discover quotes by Beethoven, Jimi Hendrix, Mozart, and many more. Enjoy! 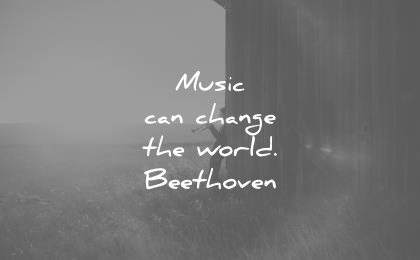 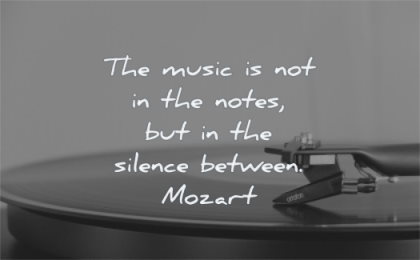 The music is not in the notes, but in the silence between. Wolfgang Amadeus Mozart 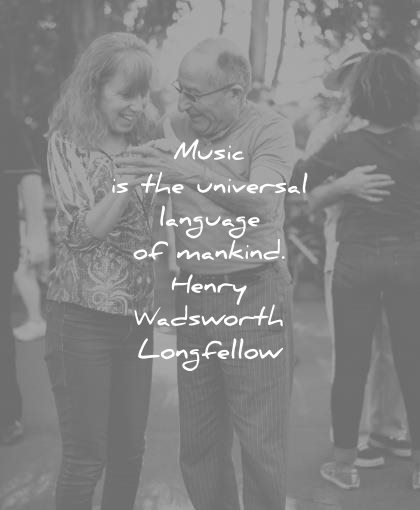 Music is the universal language of mankind. Henry Wadsworth Longfellow 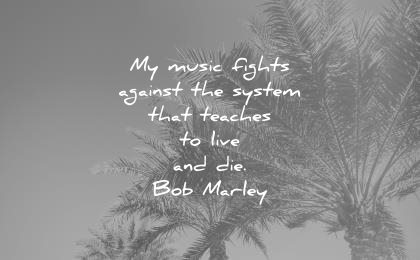 My music fights against the system that teaches to live and die. Bob Marley 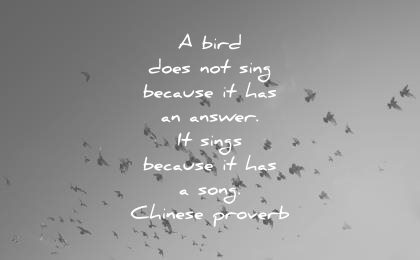 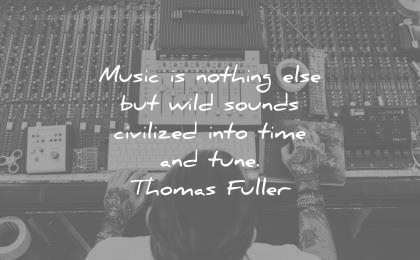 Music is nothing else but wild sounds civilized into time and tune. Thomas Fuller 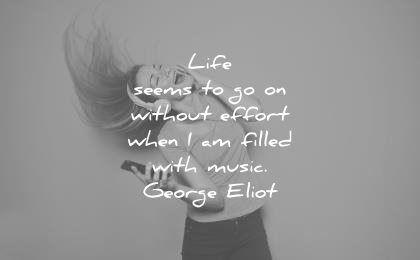 Life seems to go on without effort when I am filled with music. George Eliot 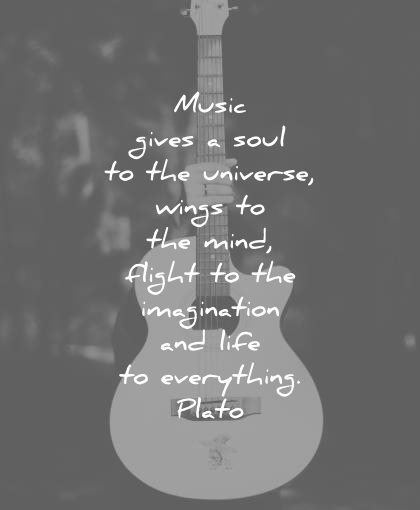 Music gives a soul to the universe, wings to the mind, flight to the imagination and life to everything. Plato 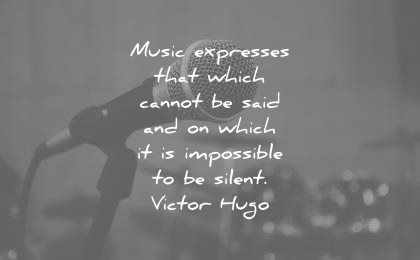 Music expresses that which cannot be said and on which it is impossible to be silent. Victor Hugo 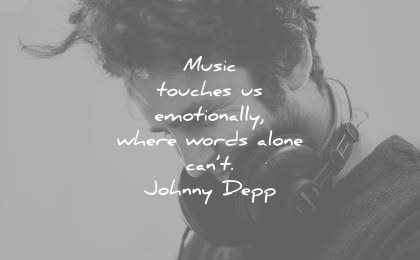 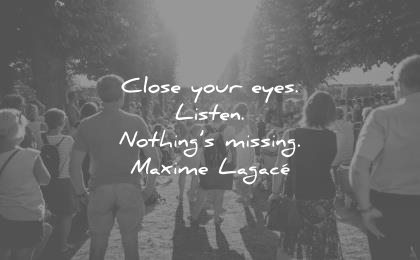 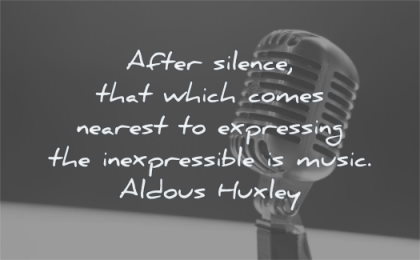 After silence, that which comes nearest to expressing the inexpressible is music. Aldous Huxley 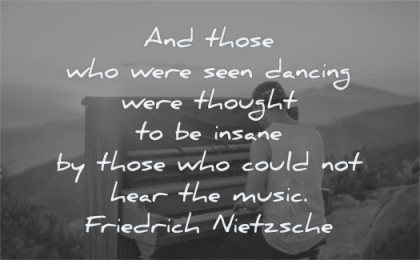 And those who were seen dancing were thought to be insane by those who could not hear the music. Friedrich Nietzsche 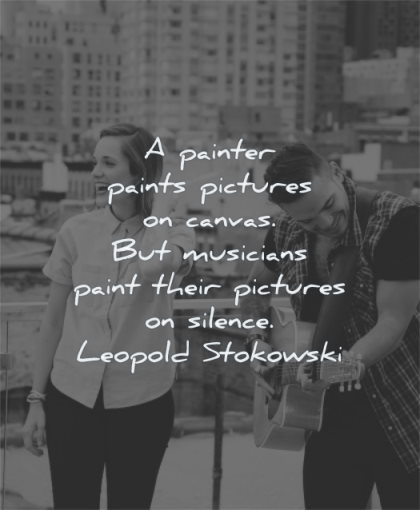 A painter paints pictures on canvas. But musicians paint their pictures on silence. Leopold Stokowski 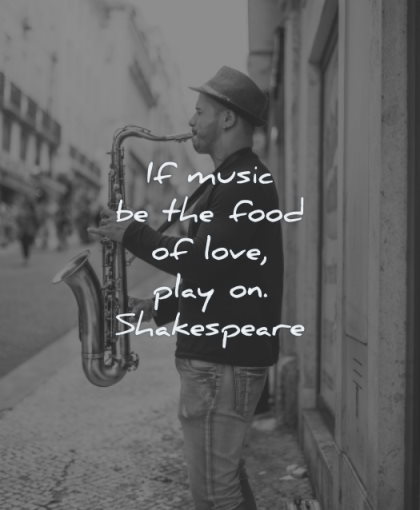 If music be the food of love, play on. William Shakespeare 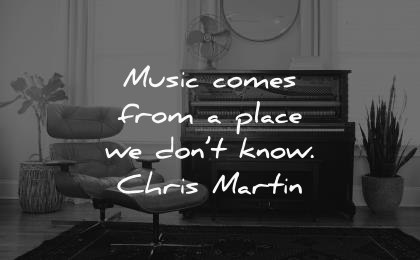 Music is an outburst of the soul. Frederick Delius

Music is the art which is most nigh to tears and memory. Oscar Wilde

If I cannot fly, let me sing. Stephen Sondheim

Music, once admitted to the soul, becomes a sort of spirit, and never dies. Edward Bulwer-Lytton

Music is the strongest form of magic. Marilyn Manson 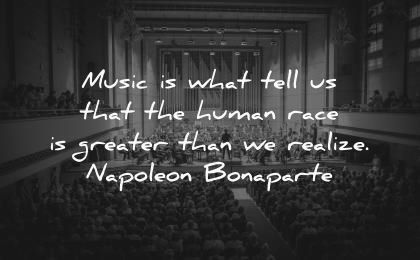 Music is what tell us that the human race is greater than we realize. Napoleon Bonaparte

Pop music often tells you everything is OK, while rock music tells you that it’s not OK, but you can change it. Bono (U2)

Music is the color of sound. Unknown

Music is well said to be the speech of angels. Thomas Carlyle

If Music is a Place — then Jazz is the City, Folk is the Wilderness, Rock is the Road, Classical is a Temple. Vera Nazarian

A great song should lift your heart, warm the soul and make you feel good. Colbie Caillat

Life is a song. Love is the music. Unknown

Music is the art of the prophets and the gift of God. Martin Luther 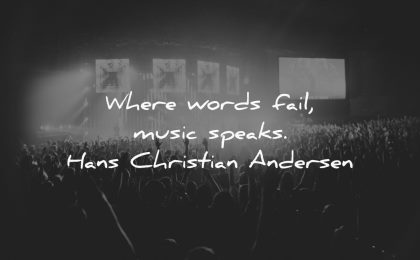 Music is the wine that fills the cup of silence. Robert Fripp

Music is the soundtrack of your life. Dick Clark

My job has very little to do with music. It has more to do with taste and culture and balance. Rick Rubin (wikipedia.org)

Music and silence combine strongly because music is done with silence, and silence is full of music. Marcel Marceau

When I hear music, I fear no danger. I am invulnerable. I see no foe. I am related to the earliest times, and to the latest. Henry David Thoreau 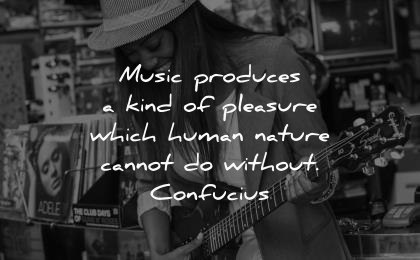 Music produces a kind of pleasure which human nature cannot do without. Confucius

Who hears music feels his solitude peopled at once. Robert Browning

I’ve found that no matter what life throws at me, music softens the blow. Bryce Anderson

Music… can name the unnameable and communicate the unknowable. Leonard Bernstein

Music has a poetry of its own, and that poetry is called melody. Joshua Logan

Music in the soul can be heard by the universe. Lao Tzu

Part 2. Music Quotes That Are…

The Most Famous Music Quotes 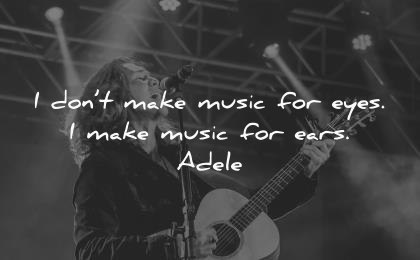 Music is my religion. Jimi Hendrix

Music is… a higher revelation than all wisdom and philosophy. Ludwig van Beethoven

Music is like a dream. One that I cannot hear. Ludwig van Beethoven

Music should strike fire from the heart of man, and bring tears from the eyes of woman. Ludwig van Beethoven (csmonitor.com)

Music is the mediator between the spiritual and the sensual life. Ludwig van Beethoven 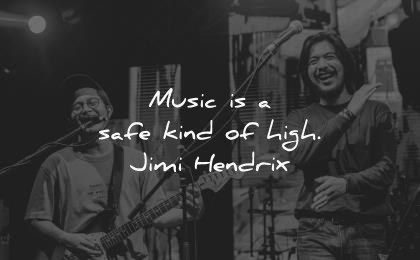 Music is a safe kind of high. Jimi Hendrix

Music is an agreeable harmony for the honor of God and the permissible delights of the soul. Johann Sebastian Bach

Bach is an astronomer, discovering the most marvellous stars. Beethoven challenges the universe. I only try to express the soul and the heart of man. Frédéric Chopin

Information is not knowledge. Knowledge is not wisdom. Wisdom is not truth. Truth is not beauty. Beauty is not love. Love is not music. Music is the best. Frank Zappa

To live is to be musical, starting with the blood dancing in your veins. Everything living has a rhythm. Do you feel your music? Michael Jackson

People ask me how I make music. I tell them I just step into it. It’s like stepping into a river and joining the flow. Every moment in the river has its song. Michael Jackson

One good thing about music, when it hits you, you feel no pain. Bob Marley

Music is the emotional life of most people. Leonard Cohen 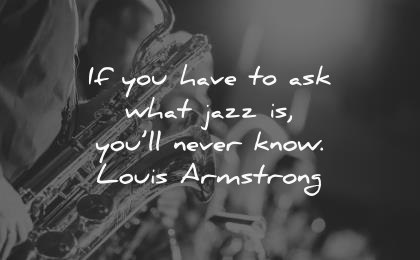 If you have to ask what jazz is, you’ll never know. Louis Armstrong

I merely took the energy it takes to pout and wrote some blues. Duke Ellington

I wanted to prove the sustaining power of music. David Bowie

Music is powerful. As people listen to it, they can be affected. They respond. Ray Charles

If I were not a physicist, I would probably be a musician. I often think in music. I live my daydreams in music. I see my life in terms of music. Albert Einstein (Did you know that Einstein played the violin? cmuse.org)

Sometimes I feel like rap music is almost the key to stopping racism. Eminem

The world’s most famous and popular language is music. Psy 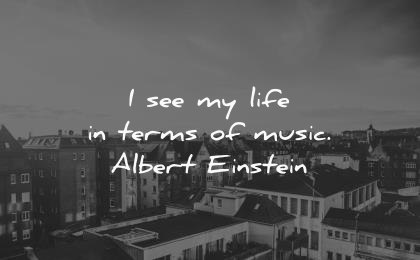 I see my life in terms of music. Albert Einstein

Music, my rampart and my only one. Edna St. Vincent Millay

It is always fatal to have music or poetry interrupted. George Eliot

Philosophy is the highest music. Plato

Music is the shorthand of emotion. Leo Tolstoy 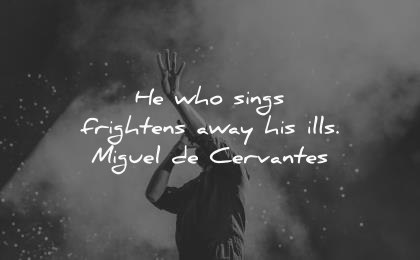 He who sings frightens away his ills. Miguel de Cervantes

Music – what a powerful instrument, what a mighty weapon! Maria Augusta von Trapp

The pause is as important as the note. Truman Fisher

I think that music has an endless life. Anne Dudley

Music is the poetry of the air. Richter

Music should be your escape. Missy Elliott

You can cage the singer but not the song. Harry Belafonte 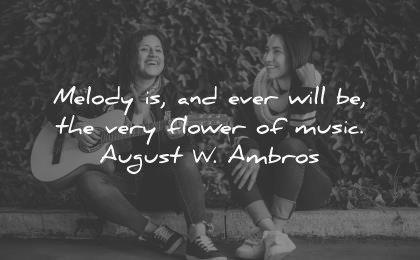 Melody is, and ever will be, the very flower of music. August W. Ambros

Without music, life would be a mistake. Friedrich Nietzsche

Every life has a soundtrack. Jodi Picoult

Music is like a huge release of tension. James Taylor 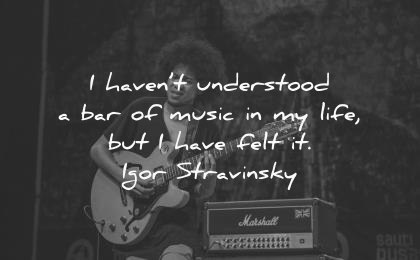 I haven’t understood a bar of music in my life, but I have felt it. Igor Stravinsky

The best music is essentially there to provide you something to face the world with. Bruce Springsteen

It’s pretty cool to see how far music can take you. Luke Bryan

Music hits us in a really emotional way. For me, it took me away in a way that nothing else could. Rick Rubin

I love the relationship that anyone has with music… because there’s something in us that is beyond the reach of words, something that eludes and defies our best attempts to spit it out. It’s the best part of us probably. Nick Hornby

Live your truth. Express your love. Share your enthusiasm. Take action towards your dreams. Walk your talk. Dance and sing to your music. Embrace your blessings. Make today worth remembering. Steve Maraboli

If everyone started off the day singing, just think how happy they’d be. Lauren Myracle 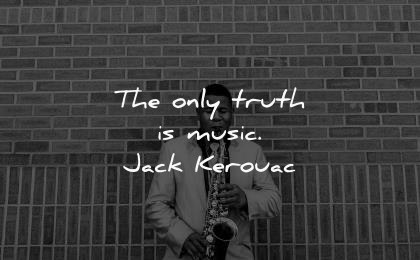 The only truth is music. Jack Kerouac

If, while at the piano, you attempt to form little melodies, that is very well; but if they come into your mind of themselves, when you are not practicing, you may be still more pleased; for the internal organ of music is then roused in you. The fingers must do what the head desires; not the contrary. Robert Schumann

No matter how corrupt, greedy, and heartless our government, our corporations, our media, and our religious and charitable institutions may become, the music will still be wonderful. Kurt Vonnegut

Everything in the universe has a rhythm, everything dances. Maya Angelou

There are four qualities essential to a great jazzman. they are taste, courage, individuality, and irreverence. Stan Getz

We grown-up people think that we appreciate music, but if we realized the sense that an infant has brought with it of appreciating sound and rhythm, we would never boast of knowing music. The infant is music itself. Hazrat Inayat Khan 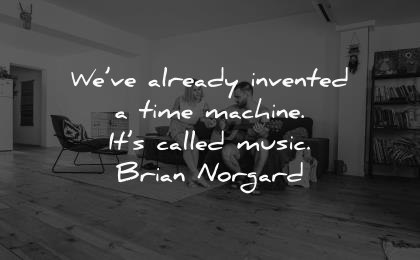 I need music. It’s like my heartbeat, so to speak. It keeps me going no matter what’s going on – bad games, press, whatever! LeBron James

My idea is that there is music in the air, music all around us; the world is full of it, and you simply take as much as you require. Edward Elgar

Music drives you. It wakes you up, it gets you pumping. And, at the end of the day, the correct tune will chill you down. Dimebag Darrell

Music is your own experience, your thoughts, your wisdom. If you don’t live it, it won’t come out of your horn. Charlie Parker

That’s why people listen to music or look at paintings. To get in touch with that wholeness. Corita Kent

Related: The Powerful Effect of Music on the Brain (thetabernaclechoir.org) 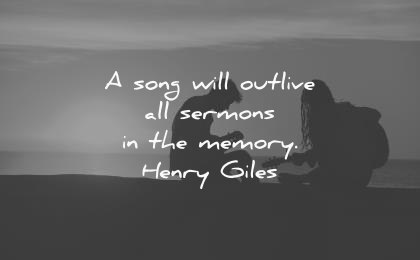 A song will outlive all sermons in the memory. Henry Giles

Music is forever; music should grow and mature with you, following you right on up until you die. Paul Simon

Do you listen to music often? What’s your favorite music quote? Please let us know in the comment section below!

Part 2
Music Quotes That ARE
The Most Famous
Short
Inspirational