Here are the top 89 moving on quotes. I’ve spent hours collecting the best ones for you. The goal? To relieve you from the burden of the past and inspire you to move toward greater things. You’ll discover quotes by Einstein, Oprah, Jordan Peterson, and more. Enjoy! 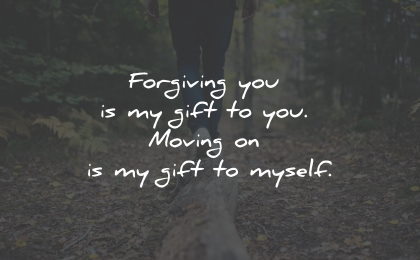 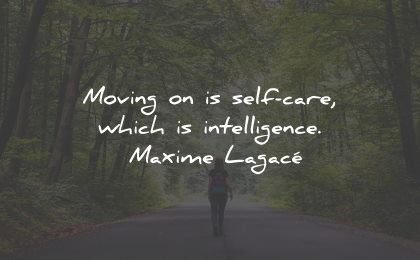 Moving on is self-care, which is intelligence. Maxime Lagacé 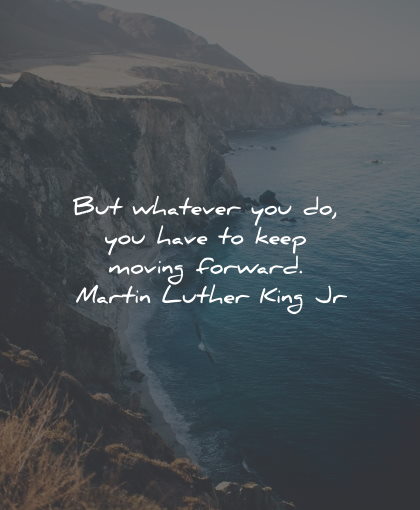 But whatever you do, you have to keep moving forward. Martin Luther King Jr 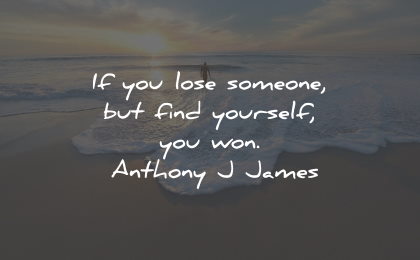 If you lose someone, but find yourself, you won. Anthony J James 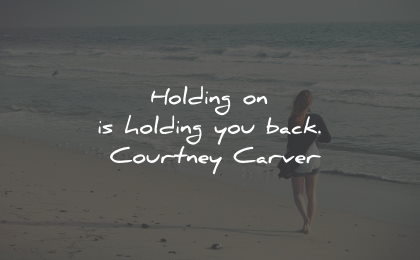 Holding on is holding you back. Courtney Carver 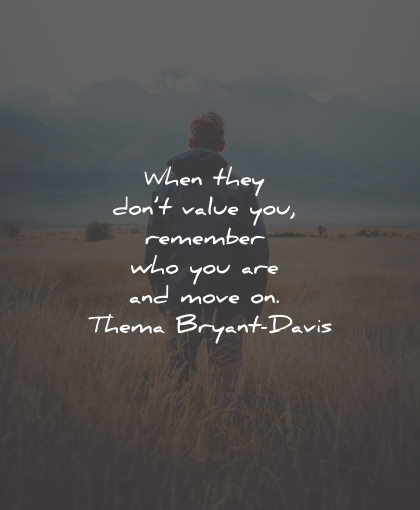 When they don’t value you, remember who you are and move on. Thema Bryant-Davis 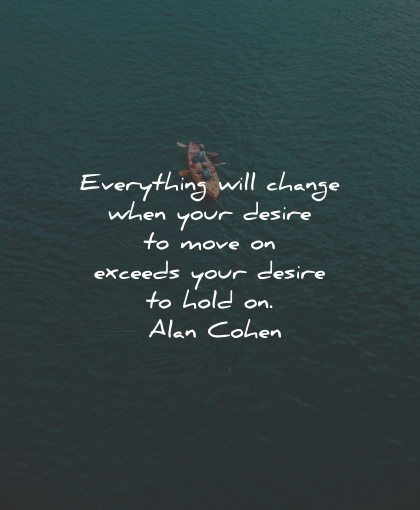 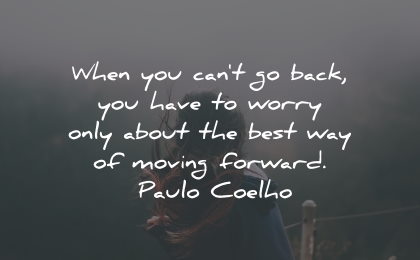 And, when you can’t go back, you have to worry only about the best way of moving forward. Paulo Coelho (The Alchemist, Amazon book) 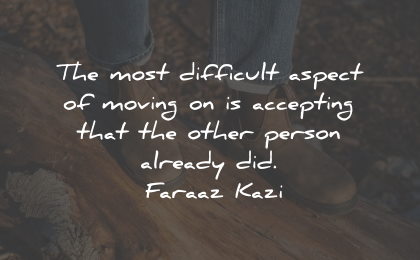 The most difficult aspect of moving on is accepting that the other person already did. Faraaz Kazi 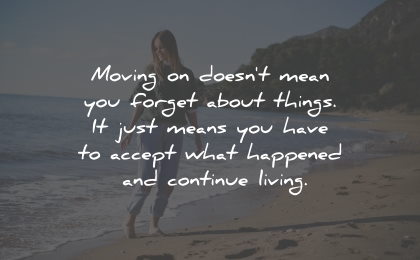 Moving on doesn’t mean you forget about things. It just means you have to accept what happened and continue living. Unknown 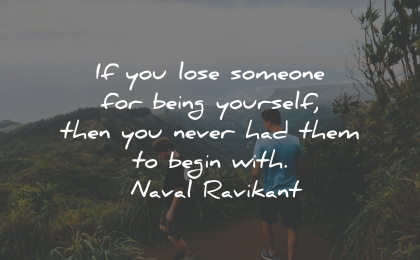 If you lose someone for being yourself, then you never had them to begin with. Naval Ravikant 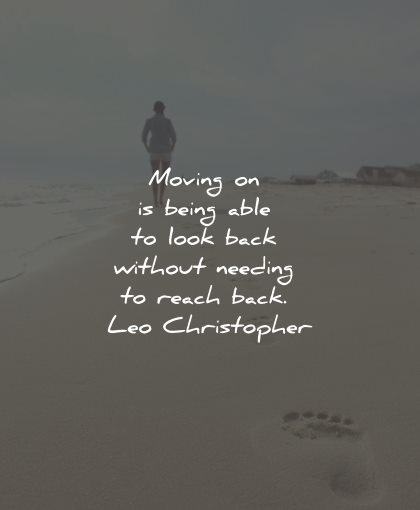 Moving on is being able to look back without needing to reach back. Leo Christopher 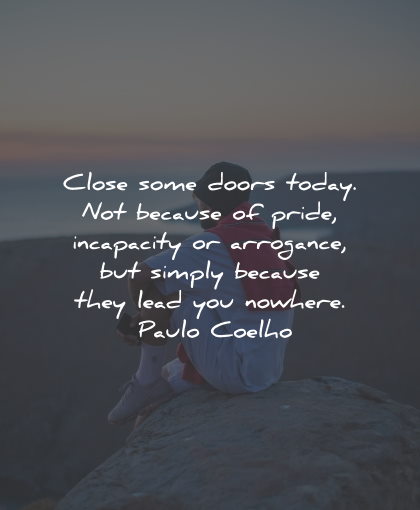 Close some doors today. Not because of pride, incapacity or arrogance, but simply because they lead you nowhere. Paulo Coelho (The Zahir, Amazon book) 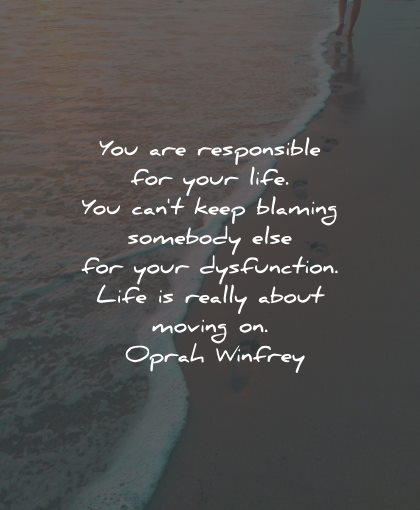 You are responsible for your life. You can’t keep blaming somebody else for your dysfunction. Life is really about moving on. Oprah Winfrey 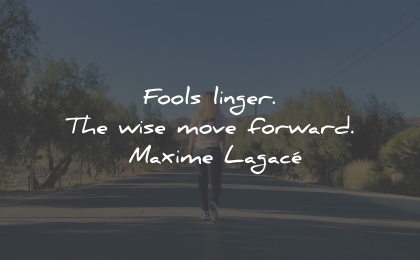 More Quotes About Moving On 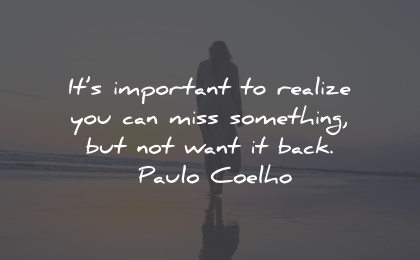 It’s important to realize you can miss something, but not want it back. Paulo Coelho

Never too late to start all over again. Gal Shapira

Letting go of toxic people is a way to save yourself. Chelsea Gomez

You must stay away from people who suck energy and time from you. Gal Shapira

Once you extract the lesson you needed to learn from your past, move the f*ck on. Stop revisiting that which no longer serves you. Carlos Del Valle

Some games can only be won by walking away. James Pierce

You must be willing to walk away from anything if it’s no longer serving a purpose in your life. Joshua Fields Millburn 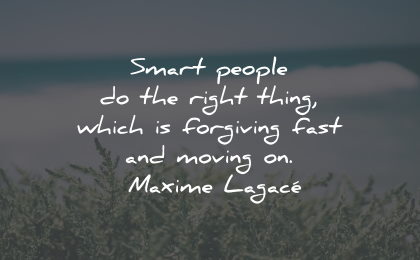 Smart people do the right thing, which is forgiving fast and moving on. Maxime Lagacé

Just keep moving forward and don’t give a shit about what anybody thinks. Do what you have to do, for you. Johnny Depp

Growth in wisdom may be exactly measured by decrease in bitterness. Friedrich Nietzsche

Accept yourself, love yourself, and keep moving forward. If you want to fly, you have to give up what weighs you down. Roy T. Bennett (The Light in the Heart, Amazon book)

You can spend minutes, hours, days, weeks, or even months over-analyzing a situation; trying to put the pieces together, justifying what could’ve, would’ve happened… or you can just leave the pieces on the floor and move the fuck on. Tupac Shakur

Everyone we meet is either a lesson or a gift. Move forward accordingly. Unknown 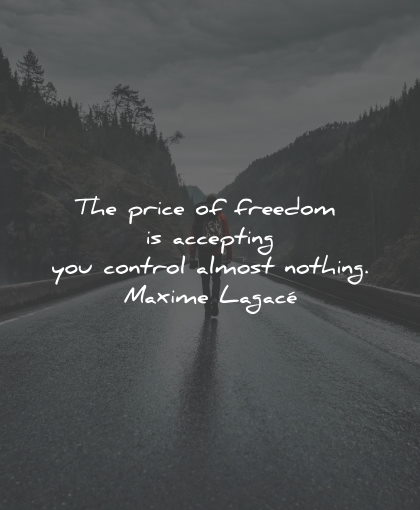 The price of freedom is accepting you control almost nothing. Maxime Lagacé

Take time to retreat to that quiet place within the pit of your soul and unleash your right to decide what is best for you. Iyanla Vanzant

Changing your mind should be something celebrated, not ridiculed. It represents a form of success, not failure. Mark Manson (Source)

Congratulations to those who moved on without getting an apology. Unknown

For better or worse, what you allow will continue. Paulo Coelho

Life is like riding a bicycle. To keep your balance, you must keep moving. Albert Einstein

It happens to everyone as they grow up. You find out who you are and what you want, and then you realize that people you’ve known forever don’t see things the way you do. So you keep the wonderful memories, but find yourself moving on. Nicholas Sparks

It is okay to not have the answer. One of the bravest things you can do is boldly embrace the unknown, accept your fear and still continue to move forward. Yung Pueblo

When we choose to move in faith beyond the familiar and the convenient, everything shifts. Thema Bryant-Davis (Source)

The price of trying to make everyone else happy is making yourself miserable. Naval Ravikant 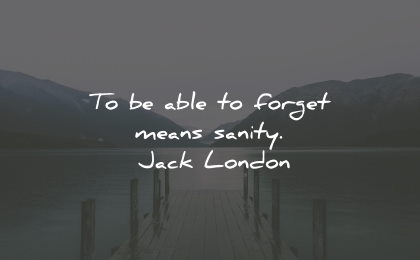 To be able to forget means sanity. Jack London

If it is not making you happier, or healthier, or calmer, or having better relationships, or wealthier, then what good is it? It’s useless. You can safely discard it. Naval Ravikant

Give yourself permission to grieve who you became in seasons of dishonor and remember you don’t have to remain where you have been. Thema Bryant-Davis

Change is scary because known challenges and pain are easier to accept than unknown ones. Amanda Goetz

Self-love is realizing sometimes you have to walk away to save yourself. Andrew Zaffina

Grudges are for those who insist that they are owed something; forgiveness, however, is for those who are substantial enough to move on. Criss Jami (Salomé, Amazon book) 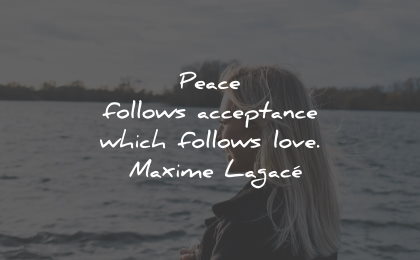 Sometimes the only reason why you won’t let go of what’s hurting you and making you sad is because it was the only thing that use to make you happy! Kimberly Jones

Maturity is what happens when one learns to only give a fuck about what’s truly fuckworthy. Mark Manson (Source)

Your destiny is too important to spend it with people that are not making you better. Who are you allowing to influence you? Are they inspiring you, challenging you, pushing you forward? Joel Osteen

Constantly bringing up the past keeps you stuck there. Kanye West

Life moves on and so should we. Spencer Johnson (Who Moved My Cheese?, Amazon book)

Don’t give the small things more time than they deserve. Marcus Aurelius 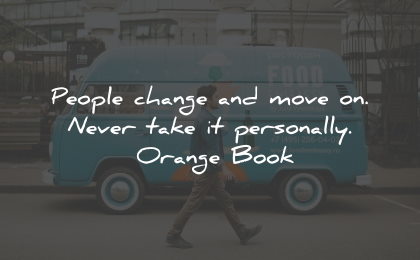 Do yourself a favor. Don’t let insecurity push you into repeating the pattern. Break the cycle. You deserve better. Thema Bryant-Davis

I hope you stand in the discomfort of growth instead of retreating to what you know is not good for you. Thema Bryant-Davis

People who grow are just people who own their mistakes and move on. Orange Book

Be patient. You’ll know when it’s time for you to wake up and move ahead. Ram Dass

More important than the ability to pick the right one, is the strength to walk away from wrong one. Ed Latimore (Source)

An immature person seeks revenge. An intelligent person moves on, allowing karma to take care of the problem. Paulo Coelho

Life takes us by surprise and orders us to move toward the unknown – even when we don’t want to and when we think we don’t need to. Paulo Coelho

The old skin has to be shed before the new one can come. Joseph Campbell 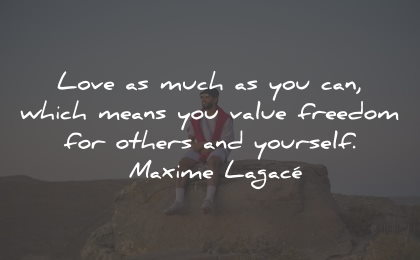 Love as much as you can, which means you value freedom for others and yourself. Maxime Lagacé

Sometimes the right decision is the hardest one to make. Don’t let that hold you back from doing what’s best for you. Mel Robbins

You shouldn’t have to fight for a place in someone’s life. If they aren’t saving a spot for you, it’s time to let them go. Mel Robbins

You aren’t really being rejected – you’re being redirected. Mel Robbins

The energy we spend to complain can be redirected to act for change. When we take responsibility, we get out of the victim mode and move on. Haemin Sunim

Wishing you had spent your time differently only wastes more time. The Stoic Emperor (Source)

Some people hate when you change because it reminds them that they haven’t. Ed Latimore

Do not waste time on things you cannot change or influence. Robert Greene 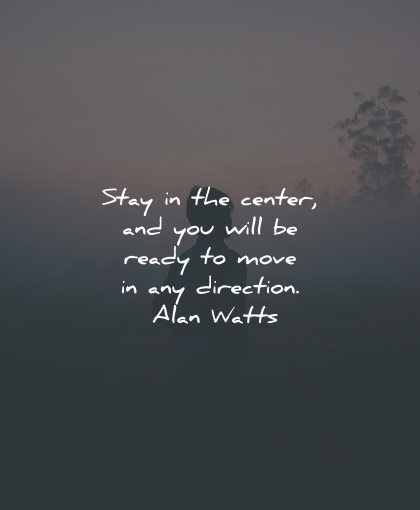 Stay in the center, and you will be ready to move in any direction. Alan Watts

One day you’ll laugh at how much you let this matter. Morley

Everything in your life is there as a vehicle for your transformation. Use it! Ram Dass

Sometimes being alone is the upgrade. Thibaut

It is always important to know when something has reached its end. Closing circles, shutting doors, finishing chapters, it doesn’t matter what we call it; what matters is to leave in the past those moments in life that are over. Paulo Coelho

Things pass, and the best we can do is to let them go away. That is why it is so important to destroy souvenirs, move, give lots of things away, donate the books you have at home. Getting rid of certain memories means making some room for other memories to take their place. Paulo Coelho

Before a new chapter is begun, the old one has to be finished: tell yourself that what has passed will never come back. Remember that there was a time when you could live without that thing or that person. Nothing is irreplaceable, a habit is not a need. Paulo Coelho

The greatest art to learn in life is to float unattached. Pass through life but be untouched by anything. Things will come and go. Osho

Always place your becoming above your current being. Jordan Peterson (12 Rules for Life, Amazon book) 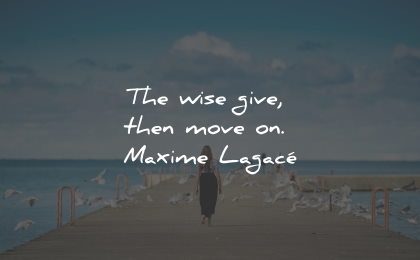 The wise give, then move on. Maxime Lagacé

I hope you enjoyed these moving on quotes.

And most of all, I hope it helped you realize that YOU are whole. You don’t *need* anybody else.

Living courageously is what wise people do.

What’s your favorite moving on quote? Please let us know in the comment section below!