Here are 100 of the most inspiring creativity quotes I could find. And the goal is simple: to inspire you, and boost your work and your life. You’ll discover quotes by Einstein, Picasso, Disney, and more. Enjoy! 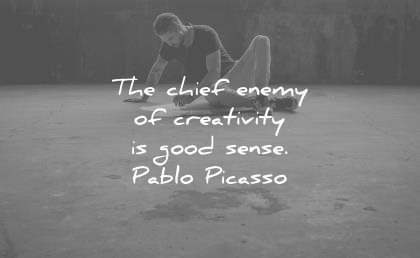 The chief enemy of creativity is good sense. Pablo Picasso 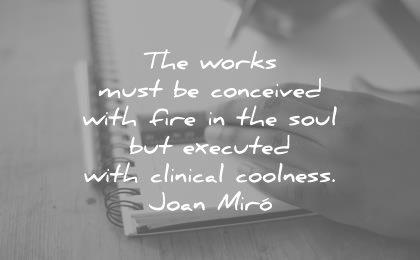 The works must be conceived with fire in the soul but executed with clinical coolness. Joan Miró 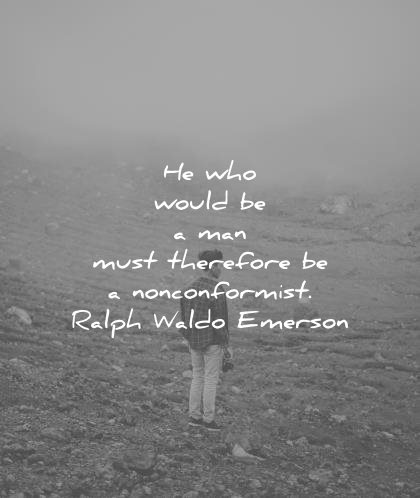 He who would be a man must therefore be a nonconformist. Ralph Waldo Emerson 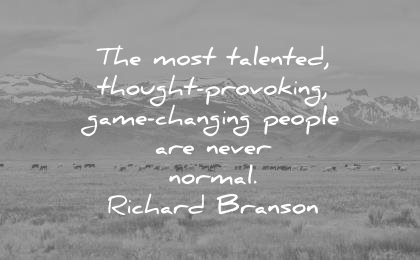 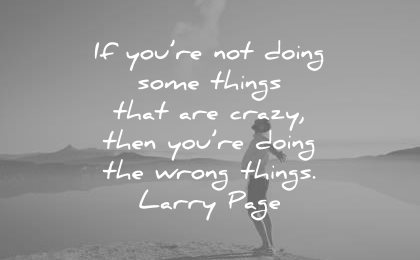 If you’re not doing some things that are crazy, then you’re doing the wrong things. Larry Page 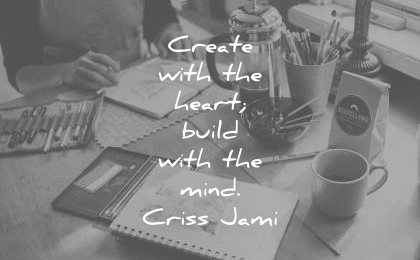 Create with the heart; build with the mind. Criss Jami 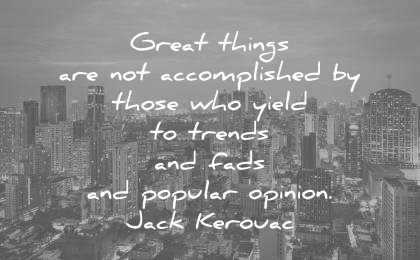 Great things are not accomplished by those who yield to trends and fads and popular opinion. Jack Kerouac 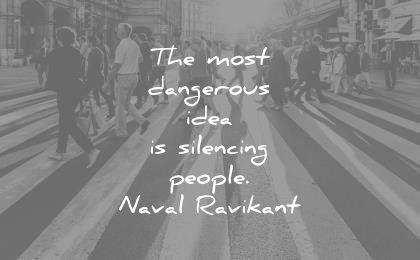 The most dangerous idea is silencing people. Naval Ravikant 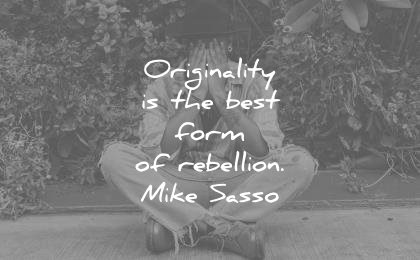 Originality is the best form of rebellion. Mike Sasso 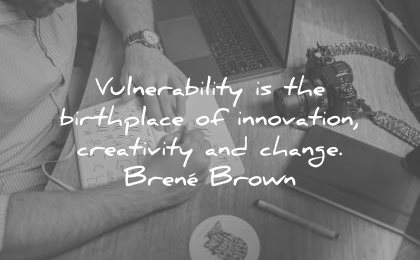 Vulnerability is the birthplace of innovation, creativity and change. Brené Brown 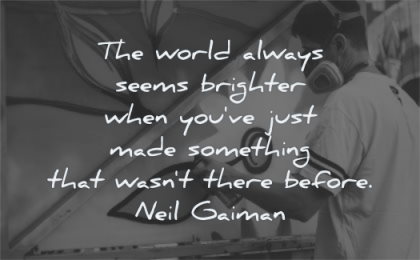 The world always seems brighter when you’ve just made something that wasn’t there before. Neil Gaiman 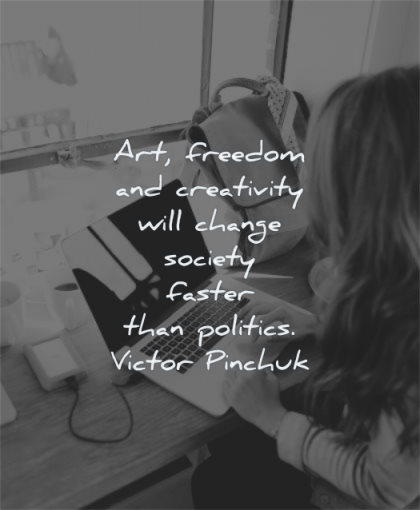 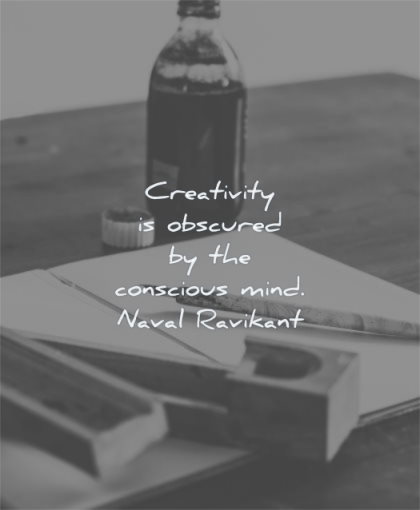 Creativity is obscured by the conscious mind. Naval Ravikant 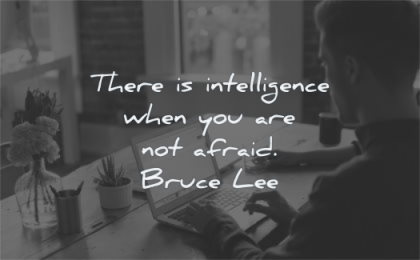 There is intelligence when you are not afraid. Bruce Lee 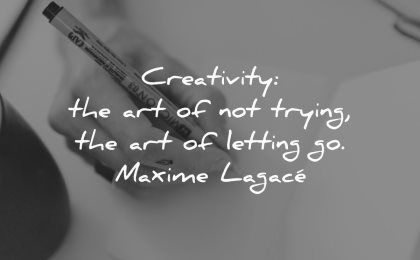 Creativity: the art of not trying, the art of letting go. Maxime Lagacé 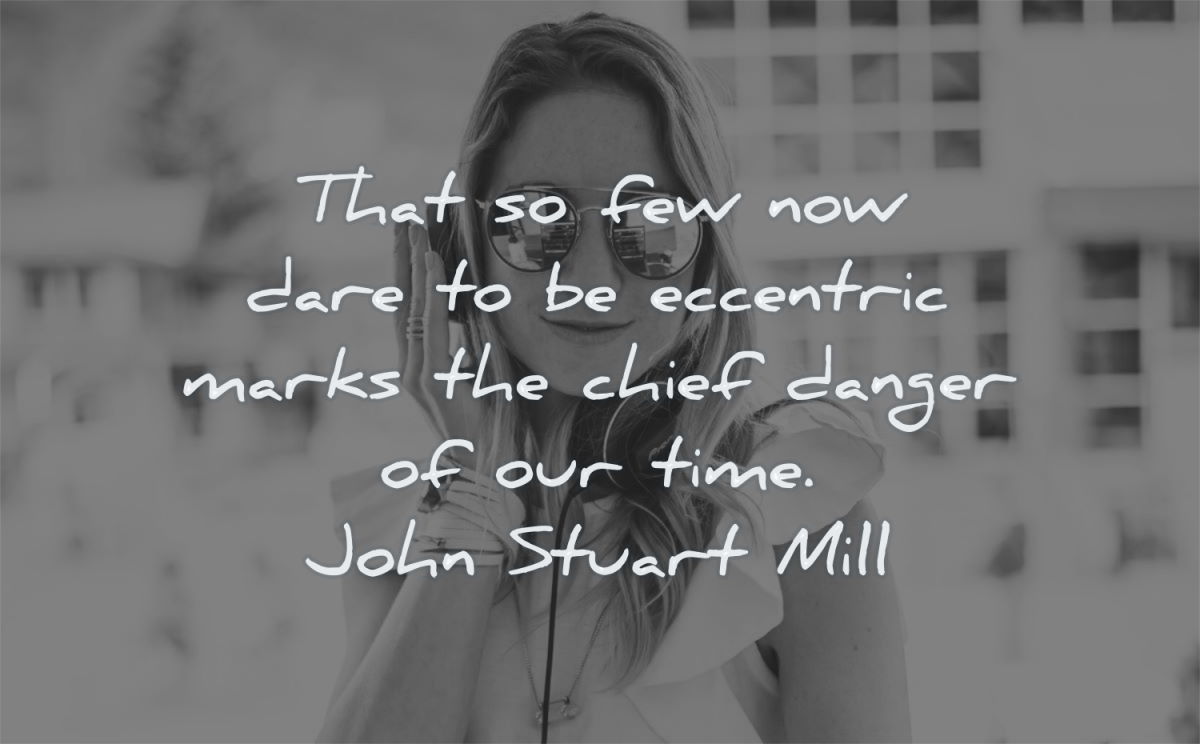 That so few now dare to be eccentric marks the chief danger of our time. John Stuart Mill

If only we could pull out our brain and use only our eyes. Pablo Picasso

You can’t use up creativity. The more you use, the more you have. Maya Angelou

The most dangerous creation of any society is the man who has nothing to lose. James Baldwin

We adore chaos because we love to produce order. M. C. Escher

How to unlock creativity: slow down, study another field, get into nature, get out of office, music (lots), sketch, cardio before/after, nibble on small ideas, throw stuff away, atomize the work, look for orthogonal inspiration, breathe, learn about circadian rhythm, paint. Brian Norgard

If it doesn’t sell; it isn’t creative. David Ogilvy 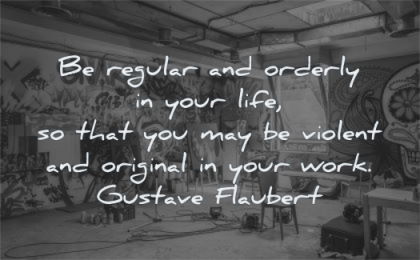 Be regular and orderly in your life, so that you may be violent and original in your work. Gustave Flaubert

An idea that is not dangerous is unworthy of being called an idea at all. Oscar Wilde

When you can do a common thing in an uncommon way; you will command the attention of the world. George Washington Carver

Great things are not done by impulse, but a series of small things brought together. Vincent van Gogh

The important thing for you is to be alert, to question, to find out, so that your own initiative may be awakened. Bruce Lee

Once we believe in ourselves, we can risk curiosity, wonder, spontaneous delight or any experience that reveals the human spirit. E. E. Cummings 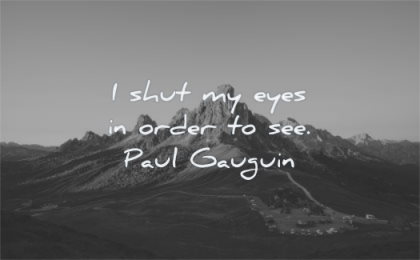 I shut my eyes in order to see. Paul Gauguin

Social media has colonized what was once a sacred space occupied by emptiness: the space reserved for thought and creativity. Mahershala Ali

When we build, let us think that we build forever. John Ruskin

It may be that our cosmic curiosity is a genetically-encoded force that we illuminate when we look up and wonder. Neil deGrasse Tyson

The principal mark of genius is not perfection but originality, the opening of new frontiers. Arthur Koestler

Go into yourself. Find out the reason that commands you to write; see whether it has spread its roots into the very depths of your heart; confess to yourself whether you would have to die if you were forbidden to write. Rainer Maria Rilke

So go on, get angry. But keep your mouth shut and go do your work. Austin Kleon

Part 2. Creativity Quotes That Are… 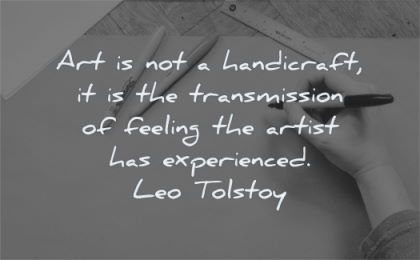 Art is not a handicraft, it is the transmission of feeling the artist has experienced. Leo Tolstoy

The richness I achieve comes from nature, the source of my inspiration. Claude Monet

Somewhere, something incredible is waiting to be known. Carl Sagan

If you’re to create something powerful and important, you must at the very least be driven by an equally powerful inner force. Ryan Holiday

The main thing is to be moved, to love, to hope, to tremble, to live. Auguste Rodin

Absurdity and anti-absurdity are the two poles of creative energy. Karl Lagerfeld

The question is not if we will be extremists, but what kind of extremists we will be. The nation and the world are in dire need of creative extremists. Martin Luther King Jr

When I am completely myself, entirely alone during the night when I cannot sleep, it is on such occasions that my ideas flow best and most abundantly. Mozart 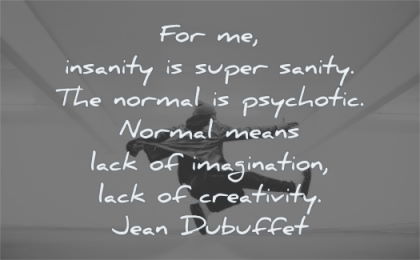 For me, insanity is super sanity. The normal is psychotic. Normal means lack of imagination, lack of creativity. Jean Dubuffet

Whether you succeed or not is irrelevant, there is no such thing. Making your unknown known is the important thing. Georgia O’Keeffe

The ability to see order in chaos is called creativity. Simon Sinek (Source)

If you hear a voice within you say ‘you cannot paint,’ then by all means paint, and that voice will be silenced. Vincent van Gogh

Don’t think about making art, just get it done. Let everyone else decide if it’s good or bad, whether they love it or hate it. While they are deciding, make even more art. Andy Warhol

If you want to destroy someone’s creativity, remove all their constraints. Tiago Forte (Source)

The less scheduled you are, the more creative you’re going to be. Naval Ravikant

Perfection is no small thing, but it is made up of small things. Michelangelo

To be an artist is to believe in life. Henry Moore

The criminal is the creative artist; the detective only the critic. G.K. Chesterton

The urge to destroy is also a creative urge. Mikhail Bakunin

Inspiration is for amateurs. The rest of us just show up and get to work. Chuck Close

When all think alike, then no one is thinking. Walter Lippman

Without freedom, there is no creation. Jiddu Krishnamurti

My humor is my creativity, and my skepticism is a gift. J. Tillman

Every new idea is just a mashup or a remix of one or more previous ideas. Austin Kleon

Creativity is as important as literacy. Ken Robinson 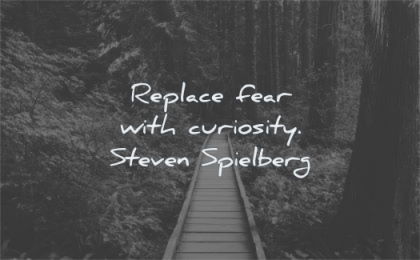 Ideas come from everything. Alfred Hitchcock

It’s harder to create than to destroy. Angela Jiang (Source)

Creativity increases when you have peace. Aaron Aalto

Everything is interesting. Look closer. Unknown 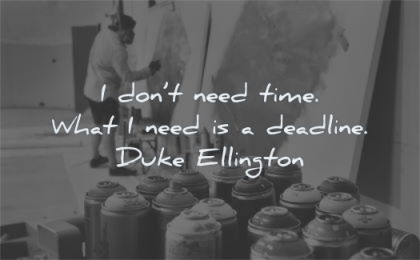 I don’t need time. What I need is a deadline. Duke Ellington (By the way, did you know that deadlines can actually crush your creativity?)

It’s no accident that AHA and HAHA are spelled almost the same way. Mitch Ditkoff

Ideas are like rabbits. You get a couple and learn how to handle them, and pretty soon you have a dozen. John Steinbeck

Google everything. I mean everything. Google your dreams, Google your problems. Don’t ask a question before you Google it. You’ll either find the answer or you’ll come up with a better question. Austin Kleon

The most exciting phrase to hear in science, the one that heralds new discoveries, is not ‘Eureka!’ but ‘That’s funny!’. Isaac Asimov

The stone age didn’t end because they ran out of stones.

Part 3. Creativity Quotes By The Most Creative People Ever

There’s a way to do it better – find it. Thomas A. Edison

There are no rules here – we’re trying to accomplish something. Thomas A. Edison

To invent, you need a good imagination and a pile of junk. Thomas A. Edison

Logic will get you from a to b. Imagination will take you everywhere. Albert Einstein

The only way to escape the corruptible effect of praise is to go on working. Albert Einstein

Creativity is just connecting things. When you ask creative people how they did something, they feel a little guilty because they didn’t really do it, they just saw something. Steve Jobs

The people who made Mac are sort of on the edge. Steve Jobs

Why fit in when you were born to stand out? Dr. Seuss

Think left and think right, and think low and think high; Oh, the thinks you can think up if only you try. Dr. Seuss

I like nonsense, it wakes up the brain cells. Fantasy is a necessary ingredient in living. Dr. Seuss

Every child is an artist. The problem is how to remain an artist once we grow up. Pablo Picasso

Inspiration does exist, but it must find you working. Pablo Picasso

Every act of creation is first of all an act of destruction. Picasso

Nothing is original. Steal from anywhere that resonates with inspiration or fuels your imagination. Devour old films, new films, music, books, paintings, photographs, poems, dreams, random conversations, architecture, bridges, street signs, trees, clouds, bodies of water, light and shadows. Select only things to steal from that speak directly to your soul. If you do this, your work (and theft) will be authentic. Authenticity is invaluable; originality is non-existent. And don’t bother concealing your thievery – celebrate it if you feel like it. In any case, always remember what Jean-Luc Godard said: “It’s not where you take things from – it’s where you take them to“. Jim Jarmusch

Hope you enjoyed these beautiful creativity quotes. If you did, please share them with a friend today!

Are you creative? What’s your favorite creativity quote? Please let us know in the comment section below!