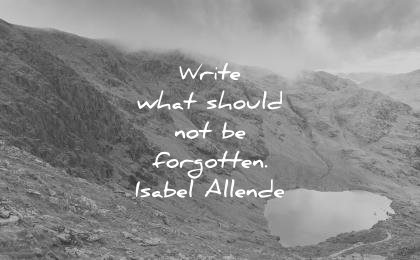 Write what should not be forgotten. Isabel Allende 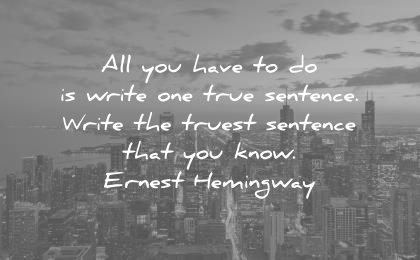 All you have to do is write one true sentence. Write the truest sentence that you know. Ernest Hemingway 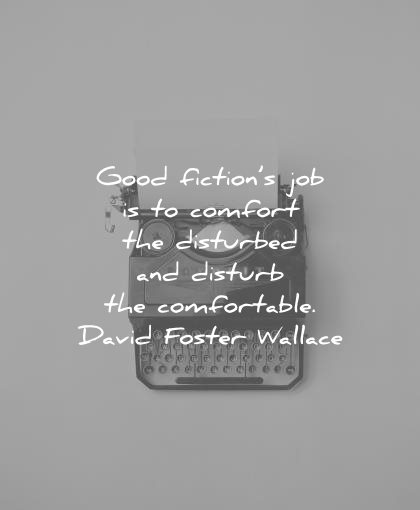 Good fiction’s job is to comfort the disturbed and disturb the comfortable. David Foster Wallace 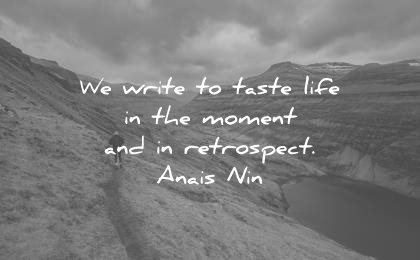 We write to taste life in the moment and in retrospect. Anais Nin 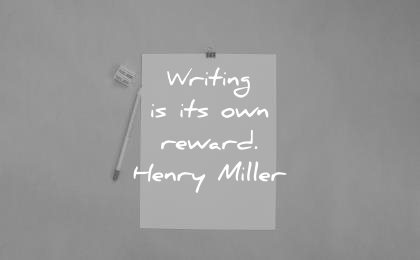 Writing is its own reward. Henry Miller 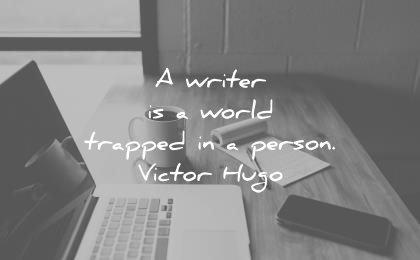 A writer is a world trapped in a person. Victor Hugo 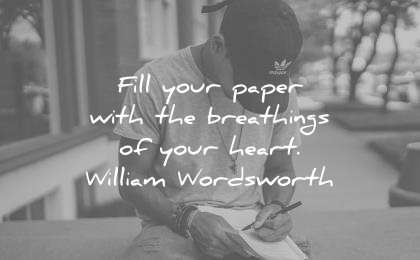 Fill your paper with the breathings of your heart. William Wordsworth 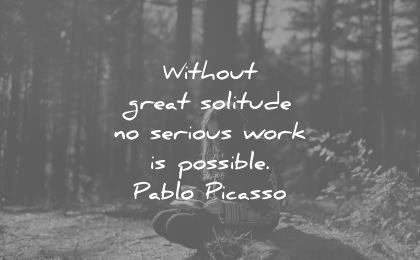 Without great solitude no serious work is possible. Pablo Picasso 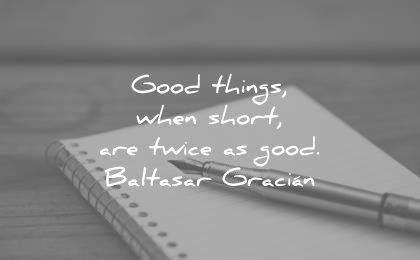 Good things, when short, are twice as good. Baltasar Gracián 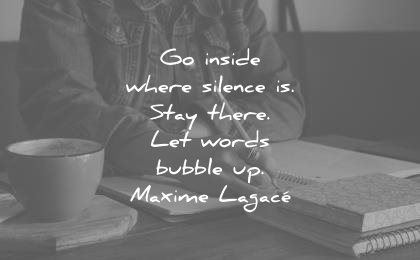 Go inside where silence is. Stay there. Let words bubble up. Maxime Lagacé 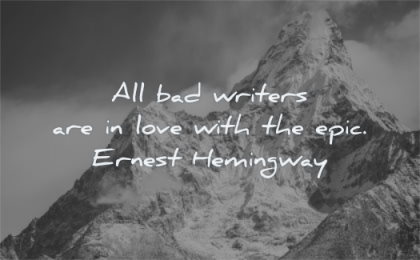 All bad writers are in love with the epic. Ernest Hemingway 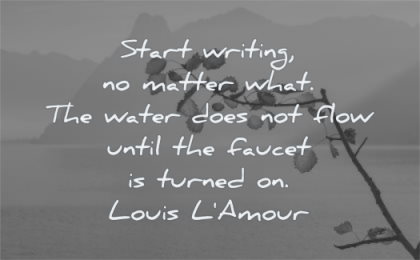 Start writing, no matter what. The water does not flow until the faucet is turned on. Louis L’Amour 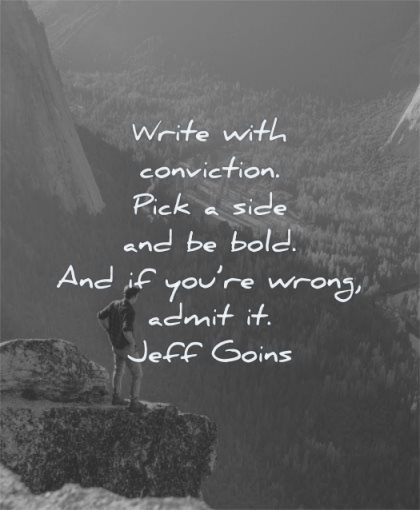 Write with conviction. Pick a side and be bold. And if you’re wrong, admit it. Jeff Goins 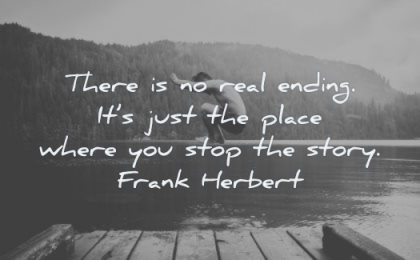 There is no real ending. It’s just the place where you stop the story. Frank Herbert 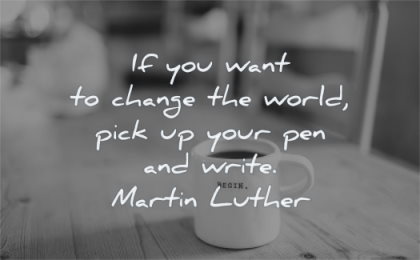 If you want to change the world, pick up your pen and write. Martin Luther 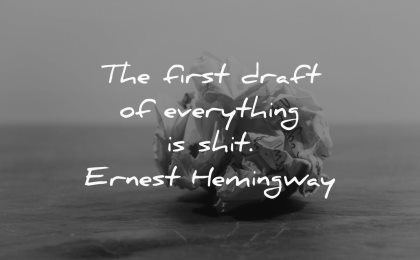 The first draft of everything is shit. Ernest Hemingway

There is nothing to writing. All you do is sit down at the typewriter and bleed. Ernest Hemingway

Write while the heat is in you… The writer who postpones the recording of his thoughts uses an iron which has cooled to burn a hole with. Henry David Thoreau

Writing a novel is like driving a car at night. You can only see as far as your headlights, but you can make the whole trip that way. E. L. Doctorow

I had so many ideas. Jammed up. It was like they just needed permission to come out. Stephen King

You go where the story leads you. Stephen King

You must stay drunk on writing so reality cannot destroy you. Ray Bradbury

You never have to change anything you got up in the middle of the night to write. Saul Bellow 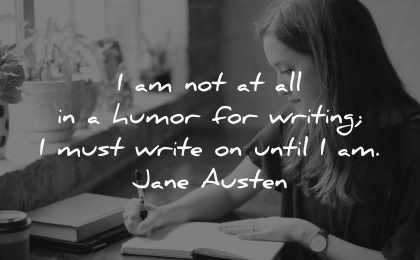 I am not at all in a humor for writing; I must write on until I am. Jane Austen

I don’t want just words. If that’s all you have for me, you’d better go. F. Scott Fitzgerald

Forget all the rules. Forget about being published. Write for yourself and celebrate writing. Melinda Haynes

A writer has the duty to be good, not lousy; true, not false; lively, not dull; accurate, not full of error. He should tend to lift people up, not lower them down. Writers do not merely reflect and interpret life, they inform and shape life. E.B. White

Writing has laws of perspective, of light and shade just as painting does, or music. If you are born knowing them, fine. If not, learn them. Then rearrange the rules to suit yourself. Truman Capote

The difference between fiction and reality? Fiction has to make sense. Tom Clancy

It is perfectly okay to write garbage — as long as you edit brilliantly. C. J. Cherryh 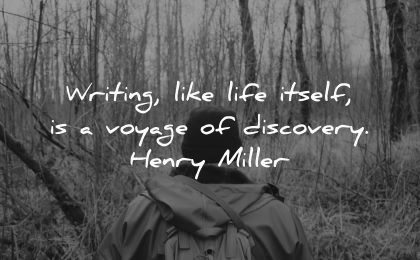 Writing, like life itself, is a voyage of discovery. Henry Miller

Indeed, learning to write may be part of learning to read. For all I know, writing comes out of a superior devotion to reading. Eudora Welty

Anybody can make history. Only a great man can write it. Oscar Wilde

If I had more time, I would have written a shorter letter. Blaise Pascal

No matter what people tell you, words and ideas can change the world. Robin Williams

Part 2. Writing Quotes That Are… 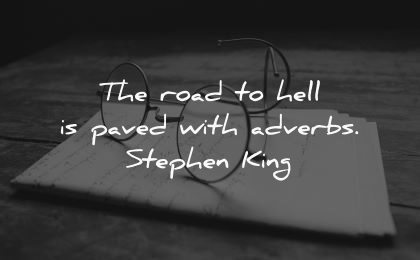 The road to hell is paved with adverbs. Stephen King

Writing for me is a kind of compulsion, so I don’t think anyone could have made me do it, or prevented me from doing it. J.K. Rowling

Don’t let the bastards grind you down. Margaret Atwood

Lock up your libraries if you like; but there is no gate, no lock, no bolt that you can set upon the freedom of my mind. Virginia Woolf 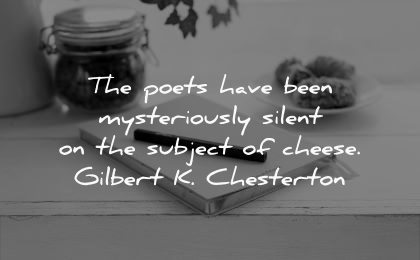 The poets have been mysteriously silent on the subject of cheese. Gilbert K. Chesterton

You can write nothing of value unless you give yourself wholly to the the theme – and when you so give yourself – you lose appetite ans sleep – it cannot be helped. Charlotte Brontë

We have to continually be jumping off cliffs and developing our wings on the way down. Kurt Vonnegut

The very reason I write is so that I might not sleepwalk through my entire life. Zadie Smith

History will be kind to me for I intend to write it. Winston Churchill 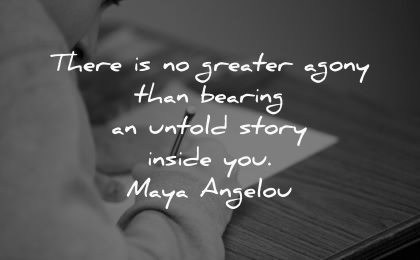 There is no greater agony than bearing an untold story inside you. Maya Angelou

People should be interested in books, not their authors. Agatha Christie

The most beautiful things are those that madness prompts and reason writes. Andre Gide

A good writer possesses not only his own spirit but also the spirit of his friends. Friedrich Nietzsche

The purpose of a writer is to keep civilization from destroying itself. Albert Camus 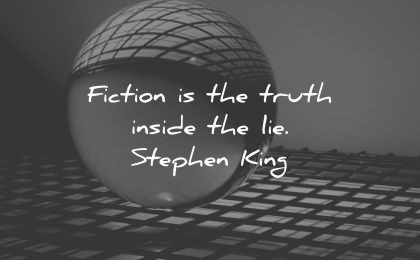 Fiction is the truth inside the lie. Stephen King

Writing is the painting of the voice. Voltaire

If there is a book that you want to read, but it hasn’t been written yet, you must be the one to write it. Toni Morrison 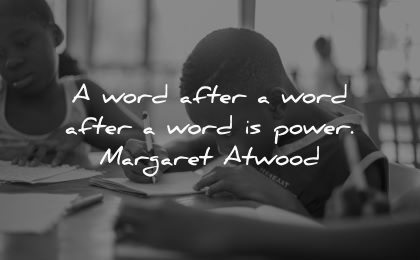 If I waited for perfection, I would never write a word. Margaret Atwood

I allow my intuition to lead my path. Manuel Puig 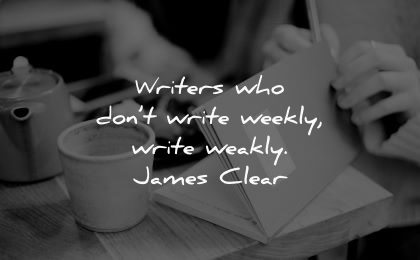 A story should entertain the writer, too. Stephen King

The adverb is not your friend. Stephen King

There is no perfect time to write. There’s only now. Barbara Kingsolver

Tears are words that need to be written. Paulo Coelho

Literature is a luxury; fiction is a necessity. G.K. Chesterton 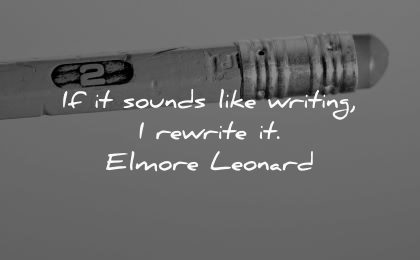 If it sounds like writing, I rewrite it. Elmore Leonard

You must kill all your darlings. William Faulkner

The pain you feel when you write is actually the pain of clarifying your thinking. David Perell

To produce a mighty book, you must choose a mighty theme. Herman Melville

To survive, you must tell stories. Umberto Eco 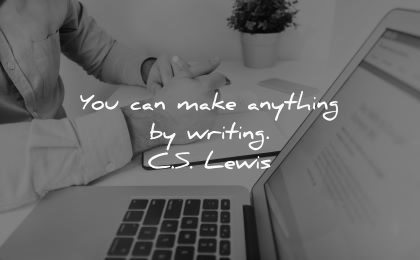 You can make anything by writing. C.S. Lewis

The answer to all writing, to any career for that matter, is love. Ray Bradbury

The pages are still blank, but there is a miraculous feeling of the words being there, written in invisible ink and clamoring to become visible. Vladimir Nabokov

Be courageous and try to write in a way that scares you a little. Holly Gerth 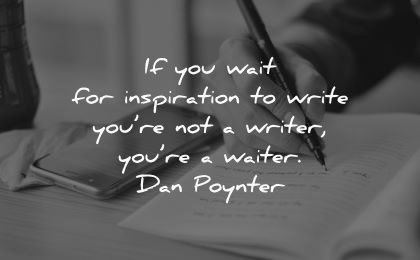 If you wait for inspiration to write you’re not a writer, you’re a waiter. Dan Poynter

To know what you’re going to draw, you have to begin drawing. Pablo Picasso

Unwritten thoughts slip away like last night’s dreams. A good sentence can carry the light of insight, undimmed, across years, decades, and centuries. The Stoic Emperor

I don’t wait for moods. You accomplish nothing if you do that. Your mind must know it has got to get down to work. Pearl S. Buck

Long patience and application saturated with your heart’s blood — you will either write or you will not — and the only way to find out whether you will or not is to try. Jim Tully

Be strategic and resilient in the pursuit of your dreams. That sounds like a cheesy quote, right? But nah, I’m serious. Resilience is one hell of a quality to master and not many have the skin for it. Tiffany D. Jackson 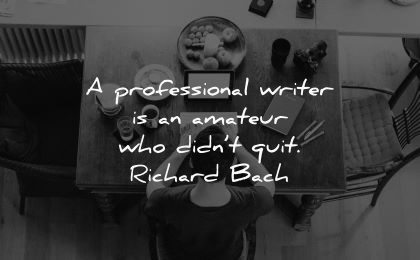 A professional writer is an amateur who didn’t quit. Richard Bach

On writers: They belong not to one system, one nation only, but to the universe. And just because they are so very far away, it is usually many years before their light is visible to the inhabitants of this earth. Arthur Schopenhauer

The main rule of writing is that if you do it with enough assurance and confidence, you’re allowed to do whatever you like. Neil Gaiman

The writer must have a good imagination to begin with, but the imagination has to be muscular, which means it must be exercised in a disciplined way, day in and day out, by writing, failing, succeeding and revising. Stephen King

Get it down. Take chances. It may be bad, but it’s the only way you can do anything really good. William Faulkner

Once I start work on a project, I don’t stop, and I don’t slow down unless I absolutely have to. Stephen King

Exercise the writing muscle every day, even if it is only a letter, notes, a title list, a character sketch, a journal entry. Writers are like dancers, like athletes. Without that exercise, the muscles seize up. Jane Yolen 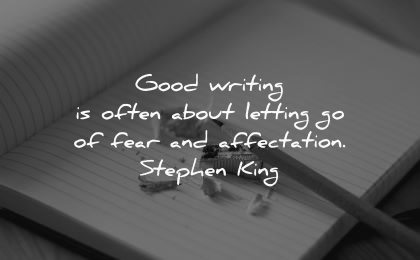 Good writing is often about letting go of fear and affectation. Stephen King

I believe myself that a good writer doesn’t really need to be told anything except to keep at it. Chinua Achebe

The secret to being a writer is that you have to write. It’s not enough to think about writing or to study literature or plan a future life as an author. You really have to lock yourself away, alone, and get to work. Augusten Burroughs

The task of a writer consists of being able to make something out of an idea. Thomas Mann

It’s none of their business that you have to learn to write. Let them think you were born that way. Ernest Hemingway

You wanna fly, you got to give up the sh*t that weighs you down. Toni Morrison 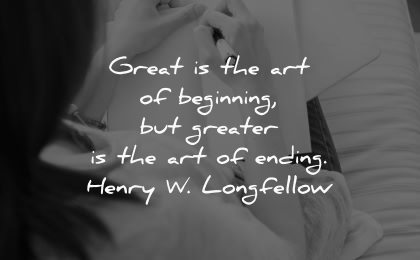 You will fail. It’s inevitable. It’s what you do with it. J.K. Rowling

Hope you enjoyed these inspiring writing quotes. If you did, please share them with a friend today!

Do you write often? What’s your favorite writing quote? Please let us know in the comment section below!